Bargains in the sales

Enjoy this story of queuing for bargains. Link.

Enjoy this link from one of a series of personal finance advice at Christmas.

Is Life actually any good?

Nope, that's not a depressed moan from Marvin the Paranoid Android. It's a question prompted by a recent conversation. What came up was the issue of the good that life insurance does. Does life insurance actually provide a social 'good' was the question. To those of us who believe that any contract between a willing buyer and a willing seller must involve a good - i.e. both believe they will profit from the exchange - this may seem like a strange question. But it has value.

Many insurers in New Zealand point to a variety of measures to prove that there is an underinsurance problem. That supposes that there would be more good derived from a higher level of cover than what is currently purchased at present. I personally subscribe to a version of that view - but set it aside for a moment. Comparisons with other markets provide us with a clue to underinsurance, but not a complete answer. A disciplined way of quantifying the good that higher levels of life insurance would do is required. I have a number of ideas - but first, drop me some of yours - we'll do an omnibus post on the subject in a week or two.

Your doctor may be lying to you...

Apparently many doctors in the US regularly prescribe placebos. This raises a number of interesting ethical questions. Of course, that placebos work in some cases, and that consumers themselves often select treatments with the shakiest - or even non-existent scientific evidence for their effectiveness (homeopathy anyone? what about colour healing?) is besides the point - the truth is pretty important. And don't just say 'oh well, that over there' - I bet you it's happening here too. Any underwriters care to comment?

Going too fast into regulation solutions

Over the past few years I have blogged a few times, spoken, and written about the need for caution in going too fast to meet a moving target in the form on 'coming regulation'. This mantra has been used to sell computer systems and training - and yet we do not yet have the information.

Dave McMillan hammers this home again by identifying the concern that insurance advisers performing detailed needs analysis may be caught as category one advisers. This remains a risk - but there is little clarity about exactly how the process of categorisation will work, and there is a fair chance that needs analysis restricted to the task of, say, assessing the need for and scale of a category 2 product solution should be treated as a category 2 service itself.

So slow down with addressing a need that may change - but hurry up with activity to clarify the actual requirement, and where appropriate, lobby for the right outcome - thinking of the consumer first and foremost.

This is a serious post. 'We' have an image problem. 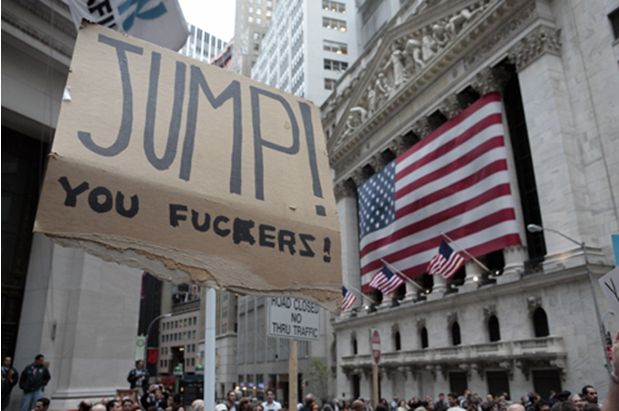 When I first saw this photo I initially thought that I should blog it as fun. On reflection that would be in poor taste. There is some evidence to suggest that suicide is literally a disease spread by the promotion of the idea. It does however bear examination as evidence that we - the financial services industry - has an image problem.

A while back I was canvassing the idea that the industry had an image problem and I was persuaded by logical argument that I was getting ahead of myself. The problem back then was confined to just a few dodgy finance companies and was not so much an industry problem - but the age old problem of getting good financial advice at a reasonable price, unconflcted by the inducements of commission.

Today I would not be persuaded.

Today after so many finance companies, a clutch of mortgage funds, corporate debt funds, a couple of major insurers, a significant number of banks internationally - some of staggering size, we cannot claim the financial services industry has an untarnished reputation.

Even survivors have problems.

We can be pleased, relieved, and glad even that no high street bank in New Zealand has run into trouble. But they still have an image problem. Borrowers are confused that in the midst of falling rates they can't get loans. Probably 25% of the people that borrowed last year couldn't apply this year because of changed criteria. Their floating rate facilities are priced sky high, and if they chose a fixed rate about 6 months ago, and asked about the break cost - they were in for a nasty shock, as has been reported by the Ombudsman recently.

Insurance companies have remained strong - stronger, in fact, than public opinion credits. But they have never been loved, and they suffer from an over-riding public impression - however unfair and wrong it is - that the people in the towers of high finance don't have a clue.

There are consequences too. Not just in the form of the cost of capital.

It will take plenty of time to overcome it. Adverts with toothpaste logos, or friendly robots, or daffy impressionists will likely disappear. Back will come more traditional messages.

More seriously, the lessons consumers may draw may not be what you expect either. Some will tighten belts and save, but others will question whether the saving is worth it... and will spend instead.

Therefore I repeat: the industry has an image problem.

My latest short piece is up at goodreturns. Link.

I have asked a select few to do guest blog posts. One of these is the excellent Russell Eastwood - someone whose work and attitude I admire very much. I am looking forward to his post.

But when I mentioned this briefly to my namesake a few weeks ago he expressed some little fear at the task. However, now it is I who should be afraid, very afraid, because this evening I presented Russell with the perfect subject for a modest two or three thousand words: he could write about how his 12year old daughter beat me in the 1500 metres at athletics today!

Frist: Congratulations to Kate. Second: Argh, the humiliation. I am 38, she is less than a third my age, and in the final 200 she steamed past me - consigning me to ninth. Yes, ninth place. Sure I could make all sorts of excuses, but oh how I wish it had been any anonymous 12 year old.

However I do have a couple of shreds of pride left - before you chuckle away too much to yourself - I would be delighted to see the field expanded a bit more. I am sure that Takapuna Athletics would welcome new members, and you can line up alongside me in the New Year.

Pinnacle Life are justly proud of the addition of a serious care product to their wizzy website. The website itself should be a lesson to web deisgners. I particularly like features like the button that reads "what happens next if I click proceed?" this helps clients proceed with confidence, knowing when they are about to make a decision. Link. Also more details at their blog.

Continuing a series of guest blog posts, here is one from author and journalist Michael Larsen.

"Funny old word, trust. Golly but didn’t it get tossed about with gay abandon at the last election? It also, of course, it became headline fodder for American scribes when the large, sturdy US financial institutions turned their cheeky little financial flirt into a full-scale Gordon Ramsay type affair and plummeted faster than a thing that plummets very fast indeed. To paraphrase Douglas Adams, they sank in much the way a feather doesn’t, or somesuch.

Weaving in Gordon Ramsay and his supposed peccadillo with a leopard skin lothariess (I meant her clothes, not her visage) actually has a point: his ultimate betrayal, it would appear, is of course one of trust. Which bring me neatly to…

…a serious point. While the tanking of Titans may seem old news, now, it’s worth noting that the ripple effect (come on, it’s a tsunami) of fear and uncertainty for the supposed ‘everyday consumer’ is not just about ‘will I get paid next week/will I have a job next week/does “no rain checks” really apply at the Big Red Shed or can the kids’ Chrissy toys go back,’ but about, hang on, these were solid-as-a-rock institutions going under here. It’s all well and good for us all to roll back our French cuffs while simultaneously rolling our eyes and go, ‘oh yes, I saw that coming.’ Ask your clients, ask the Man In The Street: they didn’t.

My belief is that one of the greatest fall outs of the ‘crash’ of 2008 will be sociological: the General Public, even the nice ones, are now as cynical as everyone else. Their notion of trust has been well and truly destroyed. Venal, vile corporate practices only happened to places like Enron, they believed, places whose Machiavellian activities affected Howick homeowners and investors not one whit. But everything has come crashing in, and now you don’t even let your change linger in the dairy-owner’s hand for too long in case it’s snatched away and the roller door goes down before you’re out.

Look at the furore surrounding Noelle McCarthy’s escapades. Frankly, being a journalist, I can tell you no one trusts us anyway. But now, and I directly relate it to the financial turmoil, The People want to see Justice Done and so, despite the fact that Radio New Zealand have actually done naff all, she has, at least, been vilified by her fellows. Publicly. That’ll do us, say the reading public (the dwindling few). As long as someone pays.

So how will all this affect us? Well, trust all around will need to be re-bought, re-won, regained. Transparency, clarity and a straight-up approach in language and action, whatever your business, is going to have an unprecedented value. Remembering that clients often say something and do another, the trust thing is going to have to work both ways, too. ‘We live in a style where trust is a drag/to hold up your end means the middle will sag,’ someone rather pithily observed. Let’s hope that 2009 isn’t a year of sagging middles, then."