Dorchester Gets the Headline

The headline on the goodreturns article is exactly what Dorchester would have been looking for - in effect, "here is a finance company that really does respect investors". Link.

Fidelity have announced premium increases at 1 July of 2.6% to 2.9% on a variety of products. New software is Midas version 10A.

Grant Evitt is joining AIA as Product Manager, Darrin Franks announced on LinkedIn this morning. Our best wishes to him in his new role. This is a second stint at AIA, Grant previously held a role as business development manager there, before moving to become more involved in product development roles at TOWER and then at INGLife.

Brokers Will Recognise This...

The products may be different in the US, but clients, they are always just the same. This day in the life of a US health insurance broker proves it. Link.

The ODT kicks off an editorial with faulty stats - and that does bother me:

The economy, it is fair to say, is very gradually improving after the short-lived recession, although the position so far as internal and external debt is concerned remains grave.

New Zealand, fortunately, is nowhere near in as bad a way as Britain, whose economy is practically in ruins, and where after last week's budget, every household will be worse off as the new government tries to rebuild.

Short-lived? Six quarters of negative growth according to the RBNZ website, from June 2008 to September 2009. That's longer than the two previous recessions. It's also longer than the UK's, although theirs added up to more contraction, just in a shorter period of time.

Britain, whose economy is practically in ruins? Well, even allowing for figurative language that kind of counjours up blitz-type images. Yes, it is true that it has been the worst recession since the 1930s, but those are relative measurements, and very high levels of public debt. To give just a little more realism though, let's consider these figures:

There are plenty of other things that are rubbish about the UK, and their level of public debt is higher than ours, so maybe the ODT should have written about those.

Take, for example, the ability to have voluntary registration. This development is useful, but is hardly revolutionary. The valuable clarification that if you only sell category 2 products then you can practice as a registered adviser has been made. Now, we add the valuable option for those advisers to apply the standards of authorised financial advisers. But exactly how this works is still being compiled in the background. That is why it is best to wait until after Royal Assent, and the final version of the Adjustment Act is compiled with the Amendment Act and the original Financial Advisers Act and do a complete review - the volume of changes is very large, some are complex, and you cannot have full operational confidence in many situations until after that's been done.

Guide to Getting Approved - Asset

For those of you that have reviewed the project my plan (developed in conjunction with the PAA) for getting AFA in the last edition of Asset, yes, I do have a soft-copy in excel format, and you are most welcome to it if you would like to just drop me an email.

Well, there are a few date changes that we now need to absorb.

While the release was a little bit coy about this, the Securities Commission has given you up to 31 March to put your application in. However, they are trying to get the majority in by 1 December - and aiming for that would be wise, if you are an AFA you don't want to run the risk of being unable to practice - even for a short period.

You have until October 31 to get your QFE ABS in to the Commission if you are to be confident of getting approval before 1 July. However, there are no guarantees, obviously. You could apply tomorrow and still fail if your ABS is poor or you are fundamentally unsuited to becoming a QFE.

Also, provided QFE status is not an operational necessity, you do not have to worry about October - you can leave applying as long as you like, it's just that you won't be operating as a QFE on 1 July.

Let's conclude with a quote:

"I am confident that the proposed competence standards are unlikely to change materially and certainly will not be reduced. I'd encourage all would-be AFAs not to wait until the last minute before applying," Mr Mayhew stresses.

I've added that emphasis. This will be small consolation to those that have paid for courses and may not require them - and, before you jump on me, I know that the education will be good to do anyway, but the advisers I feel sympathy towards are those that had all sorts of training that was unrecognised, and then bought yet more training (of a relatively low level, largely duplicating what they had) and now find that it's redundant. Now I know there aren't many of you, but that goes to show, it pays to be a laggard sometimes doesn't it?

Risk Management - Is Your Business Prepared?

This dimension of risk management caught my eye because over the years I have come to appreciate a variety of measures that I once doubted: having back-ups, being able to work in alternative locations, having staff know how to handle things like server failure, or being unable to access the office.

You do begrudge the expense - a lot like an insurance premium - but it pays off in the medium term. Even down to little things like knowing that it's not IF your hard drive will fail, it's a question of WHEN it will fail.

Anyhow, this comprehensive list can start you on the path to a more robust business. Hat-tip to InsureBlog. 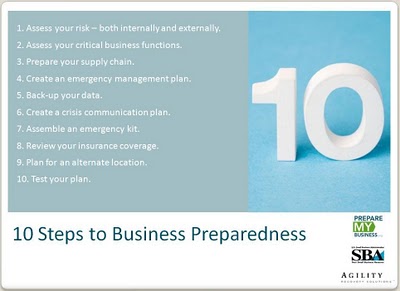 Unsurprisingly, the Financial Service Providers (Pre-Implementation Adjustments) Bill has been placed at number 3 on the Parliamentary order paper today, immediately behind the Appropriation Bill (relating to the budget) and the Rugby World Cup 2011 (Empowering) Bill – A great comment on NZ priorities!

With the order paper itself available here.