This minor benefit, available in the Trauma (or critical illness) insurance plans of most insurers is one of a number of rarer benefits. Not as rare as CJD, of course, which is supposed to have an incidence rate of about 1 per million. There were 109 new HIV infections in 2011, but how many were caused by criteria that would satisfy the conditions laid out in most policies is obviously a much lower number.

A sample of the policy wordings that apply shows that acquiring the disease through sex or drug use is specifically excluded. This one is typical:

"The accidental infection with the HIV (Human Immunodeficiency Virus) which arose from the following medical necessary events which must have occurred in New Zealand or Australia by a registered health professional - a blood transfusion, transfusion with blood products, organs transplanted to you, assisted reproductive techniques or a medical procedure of operation performed by a registered doctor. Notification and proof of the incident will be required via a statement from a Regional Health Authority or equivalent statutory board that the infection was medically acquired. Also we require open access to test independently all blood samples which were used to supply supporting evidence for any potential claims and to obtain all relevant proofs, including evidence pertaining to the alleged source of infection. HIV infection acquired through sexual activity or recreational drugs is excluded."

The section italicised is editorial.

The balance who could claim under this definition is low. It may be zero. But this is almost the industry standard wording - this company is by no means unusual in choosing this definition. Properly the intention is to avoid a moral hazard. A a situation where are client could deliberately acquire the disease in order to obtain a large lump sum payment. This moral hazard should be considered in no way unique to any group - life insurers go to some lengths to remove moral hazard from the calculations of all their policy holders. Take, for example, the restriction on payments for suicide in the first 13 months of the policy, the only remaining exclusion on most life insurance contracts these days.

But let's return to the benefit.

Note the definition requires that you have a letter from the regional health authority admitting that they caused the infection, and what's more they must admit this before the time period to make the claim has elapsed. I bet the lawyers for the health authorities never say "Oh yeah, probably your fault, hurry up and admit that..." In fact, health authorities have a hard time, like most people, admitting when they are wrong. You might recall they found it difficult to admit they'd got the sex of the patient wrong in this event I reported earlier.

New Zealand AIDS Foundation Epidemiology page shows the breakdown of diagnoses by transmission type. Note that no infections are recorded as a result of medical misadventure. It is simply not a category. There may have been eight infections in 2008 the origin of which are recorded as 'unknown'.

You may draw your own conclusions as the the value of the benefit. In the product ratings we build this is why we ascribe a potential share of claims of 0.43% of the total (for men) to Medically acquired HIV. Even that may be too high.

However, not satisfied with the already high threshold for claim three companies add clauses similar to the following:

This benefit will not apply in the event that any medical cure is found for AIDS or the effects of the HIV virus or a medical treatment is developed that results in the prevention of the occurrence of AIDS.

At first glance this appears perfectly reasonable. In fact the latter part (after 'or') is perfectly reasonably, and perhaps should apply to all benefits, in some form or another. But the former part doesn't strike me as fair, especially after all the other hurdles.

Compare the situation to lung cancer, for example. It is a horrible cancer, which most people do not recover from. However, there is a cure, and there is a person I know who has had lung cancer and survived. Insurers do not exclude on the basis of the presence of a cure for cancer - so why should they for HIV / AIDS? Of course, if a treatment is such that the disease is no more than a minor inconvenience, much like a case of corns, then obviously no payment should be made. But again this could apply to any benefit.

In comparison, consider the development of policy wordings for heart attacks. They tend towards making the definitions more generous with declining thresholds for qualification, even as the inconvenience of the very minor heart attack has reduced considerably.

For more information about these benefits you can review policy wordings in the Quality Product Research section at www.quotemonster.co.nz

Interesting to note this critical statistic about "benign" brain turmors from an article on the safety of dental x-rays (from The Economist).

Even a “benign” meningioma can kill. Around 30% do so within five years of diagnosis.

Who knew? That's a significant reason why you'd want to make sure that a "benign" brain tumour is covered by your trauma policy... and perhaps reconsider your next dental x-ray.

Some companies do not cover brain tumours, some cover them but require in the definition that surgery is needed before a payment is made. Others limit the payment to only 10% of the sum insured. To find out which, you should pop on over to www.quotemonster.co.nz and activate your free trial to Quality Product Research. All the details can be found in the policy wording analysis section.

Can you help me? I'm looking for insurance relics

...and no I don't mean a certain type of insurance broker. I mean I'd like to get hold of copies of old policy documents, brochures, advertisements, posters, rate books and the like. Any age will do, but I'd particularly like items from the 70s 80s, and 90s.

I don't need the originals - just grab your smartphone, place the item on a neutral brackground and get a good close up on the highest quality setting you can and email the file through to me. I'll share the results with the people that send in examples. Thanking you in advance. Russell.

Winners and Losers and What Industry Stats Tells Us About Strategy

Taking the stats published by Goodreturns we calculated the change between the average of the June 2011 and September 2011 sales and the December 2011 results. The table below is the result: 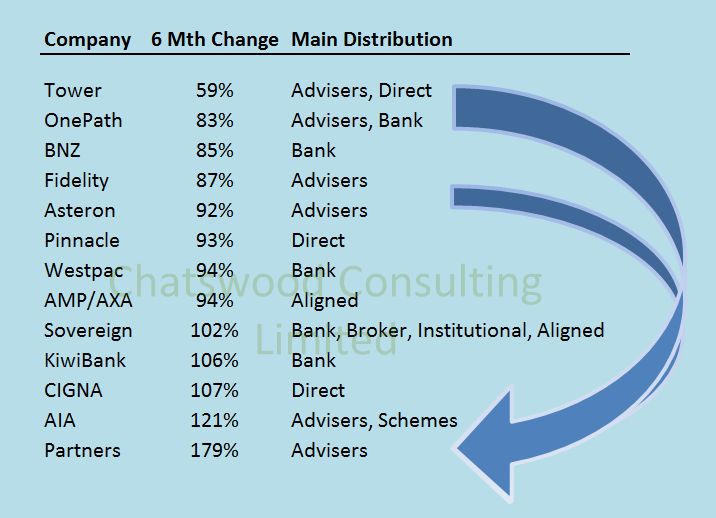 The arrows are editorial, of course. Reflecting the obvious shifts of advisers from established industry players to the dynamic newcomer, Partners Life.

A number of inferences can be drawn from the table. But the one I shall draw attention to right now is the stability in sales of companies with diversified distribution, or distribution which is bound by contract and other ties to an insurer to a greater or lesser degree.

While, for example, AMP has not been a stellar performer in terms of growth over the years, it's distribution network is highly integrated and very hard to move. Sovereign on the other hand perhaps benefits more from diversity than control. CIGNA is perhaps immune to the current force for change - the massive Partners Life impact. Banks all operate like walled gardens, but even these can suffer if institutional knowledge is not well enough embedded to prevent it's loss when key staff change.

It seems that as in financial planning, diversification has value.

How Many RFAs are there? Part Two

We pick up the story from the end of part one where (in an earlier post) I shared with readers:

By a variety of means you can whittle your way down from something in the region of 9,000+ entities to 'just' 7,000 plus RFAs. However, through a certain amount of short-sightedness in the categorisation there is no way to tell from the register what they are selling. Many will be money shops, some will be credit advisers, mortgage brokers, general insurance brokers, and life brokers - some will be several or even all of those things.

At the time we wrote this we continued to seek more information and the folks at the Ministry of Economic Development have been helpful in coming back with confirmed current numbers:

Our thanks to the MED staff.

I still think it's a shame I can't tell you exactly what those RFAs are selling, and I suspect that at some point in the future there will be a change to the register to achieve that. Regulators will want it. For example, in managing anti-money-laundering activities it may be helpful to categorise these advisers. Those selling insurance at the exclusion of other things are operating in far lower risk areas than those lending or processing foreign exchange transactions, for example.

However, the other interesting point to note is the room for recruitment. If industry estimates are right and there are, perhaps 2,000 of those RFAs that primarily sell personal protection (i.e. life, income protection, health) insurance, then that means there are more than 4,000 people already registered who could sell it if they or their employer felt that it was valuable enough.

I wonder how many BDMs are actively using the register as a prospecting tool. Managers of brokerages might look too for that matter.

Here are the latest weekly statistics from Quotemonster:

This ruling has changed the way I viewed the requirement that a person seeking to be an AFA must be of good character. I thought the provision could be weak, little used, and wondered how it could be useful in practice, and now I have been provided with an instructive answer. From the FMA press release:

"Mr Wood's failure to disclose convictions and, more importantly, the fact of his conduct behind the convictions and his attitude to compliance with the law, mean that he is not of good character such as is required to be an AFA.

"The FMA quite properly came to the conclusion, in effect, that the adverse inferences it could and did properly draw as to his character meant that it could not be satisfied that he would comply with the onerous documentary, ethical and fiduciary obligations with which an AFA must comply," Judge Harrop said in his decision.

What I found really interesting, reading the judgment was the lengths that the FMA went to in order to assess the applicant, and then how they linked the issue of disclosure with eligibility. Without thinking about the case in particular, I am glad that the FMA has developed a mechanism to test character in a way which is directly relevant to the process of giving advice.

This from Business Desk via Sharechat: Link.

Video: Denying the Need for Insurance

We're pleased to announce that our new Insurance Product research tool is now available. An great introduction to Quality Product Research is the brief video embedded below:

Quality Product Research is designed to make it easier for financial advisers to compare insurance products so that they can develop great personalised advice for their clients.

QPR Ratings provide an improved approach to insurance analysis, where reports are based on each client's individual situation. They are:

Research integrated with quoting means each rating is personalised to the client being quoted. It’s fairer because products don’t get rated on options the client isn’t buying or could never claim on. We think that’s an important step in meeting the compliance requirements for a personalised advice service.

We’ve also made it easier to buy – advisers can see star ratings for free, or get a one-off report for just $5, or buy a subscription for $95 a month. Remember, to access the research you need to do a quote at www.quotemonster.co.nz and activate your free trial.