Six months after the devasting Hurricane Sandy hit the east coast of America, the cleanup is still a work in progress. The Storm that caused some $50 billion in damage and killed 159 people has not been forgotten.

Below are some snapshots of Hurricane Sandy by the numbers. Graphics sourced from Property Casualty Insurers of America. 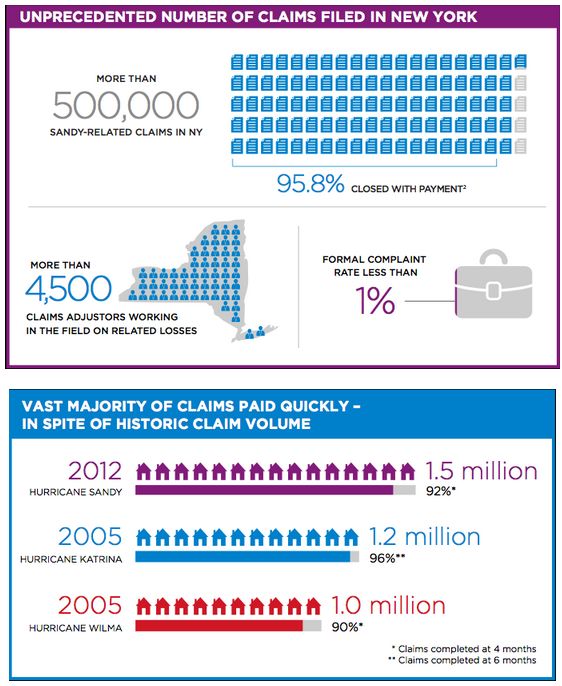 Head of over to Risk Management Monitor to read more.

As a part of that session we talk about how to go from the starting point of the universe of insurers that are licenced in New Zealand down to the actual set that you consider as an eligible group from which you will identify appropriate products for your clients.

In that session I talk about the criteria you use to get from universe to an approved provider list - and we have produced a handy spread-sheet to help you with that process. Here is how it works:

Please remember the tool is for advisers, or anyone else in the industry who is interested in the process, and it is not meant to recommend one insurer over another - only to illustrate how an adviser might approach the process of developing a preferred provider list. If you are a consumer seeking to purchase cover then we point out that this is not advice, and you should contact a financial adviser.

The IFA are hosting the Risk MasterClass Workshop in Auckland this week.

Russell Hutchinson is presenting on the following:

The following people are also presenting throughout the two-day workshop:

Our best wishes to all participants and presenters. It looks like a good programme.

I spent an entertaining evening at the PAA Awards dinner on Friday night. The event was well run and was obviously the cheerful conclusion to a good conference. Attendees were there in great numbers and the awards ceremony was all about advisers - there were awards for companies, but the emphasis was strongly on advisers. Adviser finalists had the biographies read out so that other advisers could get an understanding of their achievements, the award winners gave clear thanks and credit to the advisers and other people that helped them to obtain their success. The evident emotion and gratitude to fellow advisers - also present with the passing on of the role of President - showed that there was a strong sense of community in the association.

Helping Clients Put A Value On Their Income

This calculator at "what's my income quotient" simply and quickly creates a figure for your future earning capacity, and adds a neat calculator for your likelihood of having a long term disability. It's a worthwhile addition to the income protection ales toolkit. Link.

The 183rd Cavalcade of Risk is brought to you from New Zealand. For our international guests this country is also sometimes known as The Shaky Isles, and in consequence it is also home to some of the largest insurance claims in the world, recently. But let's start the Cavalcade with the regulars:

Next up we have a submission from Julie Ferguson of The Workers’ Comp Insider of a post authored by Jon Coppelman – "Freedom of Religion = Freedom from Workers Comp?" Jon Coppelman of Workers’ Comp Insider looks at the fascinating clash between one state’s attempt to enforce public policy in protecting workers in the face of a strict religious commune that doesn’t believe in the concept of insurance. There was a time when religious prohibitions on insurance were common - the principle of the sanctity of human life being extended to a ban on what were seen as unseemly wagers on death.

Then we have "Are We Taking the Wrong Retirement Risks?" from Jason Hull at hullfinancialplanning.com. This article examines how we should be using mental accounting to allocate our investments to appropriate risk pools in our retirement portfolio.

Louise at The Colorado Health Insurance Insider posts on "Balance Billing From Non-Network Providers Who Work At In-Network Facilities." Jay Norris tells us "This has been a frustrating problem for us for years. Non-network docs getting the benefit of working at an in-network hospital. Patients do their due diligence planning in-network care and still get balance billed by the out of network docs. The Colorado Division of Insurance tried to fix it, but got sued. They could have gone about it better for sure. Please read this and let us know if anybody has any advice!"

Jason Shafrin gives us "The Most Important Health Policy Study of Our Generation" from Healthcare Economist. He asks: Does Medicaid improve health outcomes or reduce financial risk of beneficiaries?  The Healthcare Economist reviews the Oregon Medicaid study, one of the pivotal studies of our generation, and finds significant decreases in beneficiary out-of-pocket cost, increases in access to care, but little to no effect on health outcomes.

SELECTED BLOGS FROM THE UK, SOUTH AFRICA, AND AUSTRALIA

Looking for positive posts about insurance made me sensitive to this headline: Where’s the coverage? Insurance in the news, by Nick Kellingley, of a UK tech provider's site to the insurance industry.

From a traditionally dynamic market - South Africa - this post about obtaining cover for mountain climbers appealed to the daredevil in me. I know that plenty of Kiwis have sought similar cover. "Insurance for professionals participating in mountain climbing and extreme sports"

From our near neighbours I found this post "I've been fortunate" which shows that like New Zealand, Australia is also grappling with the fact of underinsurance, and real risks.

From New Zealand we kick off with a post from Philip Macalister at goodreturns.co.nz has a good post calling on the industry to reframe the underinsurance debate. He has a point.

Graham Matthews at interest.co.nz covers the changes happening to the way insurance policies on homes in New Zealand are shifting to a sum insured approach. You need to know about this.

To underline the importance of communication on this point we have an article on stuff.co.nz reporting on a survey showing that most Kiwis remain unaware of the change.

Kelly at our own Quotemonster blog posts about the readability of New Zealand insurance policies drawing on a report I prepared a couple of months ago for consumer groups.

Also at stuff.co.nz, Rob Stock talks about his experience filling in insurance forms - and guess what? You should be honest.

Finally Diana Clement, in the New Zealand Herald, talks about liability insurance for the non-expert.

The next host is Jeff Rose. Get typing and submit your articles to the Cavalcade. Jeff can be found at:

Those interested in the extension of healthy life can check out this report from the Statistics Department. Link.

Rob Stock has a pretty good piece on filling in insurance forms. Plainly written from personal experience it has a sharply real feel to it. Key points are:

It particularly caught my eye as I had just finished writing a piece for the next Asset magazine on claims, although my piece tends to focus on the role of advisers in helping to make sure clients are clear about what they can and cannot claim for.

At least in the US, signs are emerging of a thaw in the Reverse Mortgage market with more loans, and larger loans, being taken out at a  younger age. Although that average age is 72. Link.

The RBNZ has published an update on the insurance industry licensing process here: Link.