A company ran a wellness program with its staff and proved that it should be in a lower risk category, by so doing, it won a reduction in premium from its company health insurer.

The program could not have worked without reliable data collected from the fitness programme with wireless gizmos tracking the number of steps walked each day by the employees. Link.

HFANZ Statistics Show Stability in Lives Insured - a very small decline in the first quarter of this year followed a gain in the December quarter. Overall the picture is stable, and may get better still.

Health insurers have seen modest growth in claims and premium over the past year as public health spending growth continues to be reined in.

Data released by the Health Funds Association (HFANZ) today shows claims costs for the year ended June 2014 were up 7 percent on the previous June 2013 year, while premium income for the year was up by 5.3 percent – more than twice the rate of public spending growth.

HFANZ chief executive Roger Styles said the growth in private health claims and premium was not surprising considering the public health sector had been in cost-cutting mode for some time.

“With public health spending growth at very low levels, we are seeing the private sector doing more and more to fill the gaps created in our health system,” he said.

“Health insurance is increasingly called on to help fund things which people have trouble accessing publicly, such as elective surgery.”

A recent study by TNS Research showed around 280,000 New Zealanders were in need of elective surgery, with public waiting times commonly in excess of 12 months.

Mr Styles said that health systems globally were in a phase where demand was rising faster than governments’ ability to fund it through taxes.

“This means a big shift is underway in how healthcare is financed, where people will have to pay more for their healthcare. New Zealand is not immune from this shift, and insurance will likely play an even bigger role helping to fund healthcare for New Zealanders,” he said.

This statistical supplement sets out key health insurance statistics for lives covered, claims and premiums over the previous quarter and 12 month period, together with commentary on changes and underlying trends.

The actual change in lives covered was a decline of just 1200 in the June quarter. Total lives covered as at 30 June 2014 stood at 1.334 million. On an annual basis, lives covered declined by 5000, or 0.4 percent over the year ending June 2014. The relative stability in lives covered over recent quarters is welcome, and comes after a positive December 2013 quarter suggested the prolonged period of decline in lives covered post 2008 had run its course. 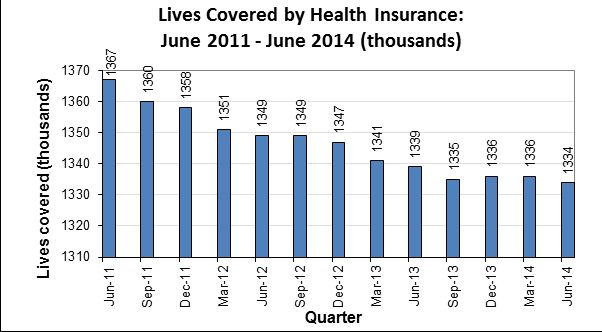 Changes in lives covered by age-group

The table below gives a breakdown of the changes in lives covered over the past year by age group. A large part of the reduction is in the 35-49 age group, with this group accounting for a reduction of around 5000 lives covered over the year. A further 3000 reduction was seen in the 0-19 age group, suggesting family policies accounted for almost all of the reduction over the past year. Offsetting this somewhat was an increase of around 3000 for those aged 65 and over, as the year saw a further significant inflow of baby-boomers moving into this age group. 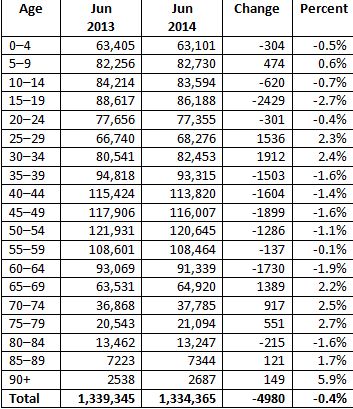 The strong growth in claims paid recorded over recent quarters has moved annual claims closer towards the $1 billion level. It is expected that total annual health insurance claims will reach a billion dollars this year, underpinning the valuable contribution health insurance makes to total health spending. In our earlier blog post "ASIC to Investigate One-Stop-Shops" we could have done a better job of explaining exactly what ASIC was concerned about. Scroll down a few articles and you can see the original.

Fundamentally the idea of providing many areas of advice is plausible as a good basis for a financial services business - after all, modern retail banks operate essentially the same model.

What interested me was that many of these 'horizontal' organisations covering many different segments of service rarely seem to gather all the benefits of the referral gains from offering many services. But that is not what interests ASIC: ASIC aren't so much interested in the one-stop-shop, but the 'one-size-fits-all' issue.

Although some advisers have reacted with outrage - you can read the comments on the article I linked to - the problem with one-size-fits-all can be summed up simply: if everyone gets the same answer how can it be personalised advice? You can sell many financial services that way, but it was exactly the kind of thing Elaine Campbell was referring to in her speech. Although I dislike the sweeping opening remarks which appear to tar every financial services industry participant with the same brush... there is still plenty of it about.

Returning to the issue of 'one-size-fits-all' there is a more subtly problematic version. With a starting point of full advice and a broad selection of approved products for one service - say investments - a secondary service can often be offered. If the secondary service is then limited to just one approved product then the much more limited nature of the advice needs to be clearly flagged to the participant.

The Ministry of Business, Innovation, and Enterprise (MoBIE) has published an update on the Financial Markets Conduct Bill. Link.

A register of all skin cancer cases would provide much-needed data. As our population ages and changes we need to have a better picture of what cancer incidence looks like. We also need to know whether public health campaigns urging people to avoid getting sunburn are working. A register of skin cancer diagnosis would definitely help both of those objectives. It is a classic opportunity for the co-ordination that our national health care system can bring - insurers, incidentally, would benefit from the additional data as well.

New Zealand has not had quite the same experience of the rapid development of one-stop-shops - by which is meant a broad financial services advice business usually extended into real-estate agency plus associated legal services. It is interesting to note that the challenges of running these broad 'horizontal' organisations seem to have overwhelmed anticipated benefits in acquiring and marketing additional services to each customer. Link.

LV= in the UK commissioned a survey to explore the issue of gender differences in health and found that men are twice as likely to ignore serious health symptoms.

I actually kind of like that news. Since I started following the Harding Center for Risk Literacy I have a new found respect for scepticism about medical matters. Also I quite like the idea that the kind of person I am is not a complainypants but a tougher creature, capable of shrugging things off.

But, if only that were true.

I am in fact a person who does complain a bit about aches and pains, I am a tiny bit sensitive to criticism, and I do keep an eye on my health. The rugged thing is perhaps a bit 'aspirational.' Although I still don't think I'm a complainypants as a person.

Also, there is some inconvenient data.

Men do not live as long, in almost every country around the world. You can check that information out at this link. That fact is probably a result in part from ignoring health problems, and in part from the greater risks men take.

So go read the article. Also, have a think about any odd lumps, aches, pains, and when you last had a good comprehensive check up - and book one in. We would like you to stick around.

While the non-medical sum insured triggers for further tests are high in New Zealand compared to the rest of the world the trigger level for financial information is significantly tougher here - a recent example from the UK suggests:

Zurich in the UK allows a limit of 2million GB pounds before requesting financial information, which is about 74 times the median weekly earnings. link.

OnePath in New Zealand, just to pick a company, allows a limit of $2million NZ which is about 44 times the median weekly earnings.

The slideshow for my presentation to the IFA conference on Total and Permanent Disablement Insurance is now available at my Slideshare location and on LinkedIn.

Fidelity Life and nib Health Insurance - Quote them together on Quotemonster