The Reserve Bank of New Zealand is to run consultation sesions on the proposed collection of NZ Insurer data. I plan to attend the Auckland session. Here are the details:

Today the Reserve Bank released a consultation paper entitled: Collection of NZ insurer data. As signalled previously, the Reserve Bank is establishing a regular insurance data collection and reporting system. This is required for efficient prudential supervision of insurers, as well as for monitoring and analysis of developments at the sectoral level. Eventually there will be regular publication of some of the information obtained from insurers. Some changes are also proposed to solvency returns.

Proposed requirements for the regular data collection from licensed insurers have been uploaded to the Reserve Bank’s website here.

The consultation documents include draft templates and a consultation report which discusses various options and raises some questions for consideration.

The Reserve Bank will host seminars on the consultation (including a question and answer session) in Auckland and Wellington, as follows:
1) Wellington, at The Reserve Bank Building on Thursday 11 September 2014 from 10am to 12pm
2) Auckland, tentatively planned for Friday 12 September 2014 from 10am. Details will be confirmed as soon as possible.

If you intend attending a seminar please respond to insurancedata@rbnz.govt.nz by 5 September, indicating the session and numbers attending.

Interested parties are strongly encouraged to provide feedback on the proposals. Submissions close on 8 October.

Congratulations to Partners Life for achieving a five star rating from the Beaton survey of financial advisers. From the Partners Life e-mail:

"Thanks to you, for the fourth year in a row Partners Life has again received a 5 star rating from the annual Beaton Survey of Independent Advisers.

Partners Life was the only company to receive a 5 star rating in the 2014 survey, and scored an overall satisfaction rating of 85% up from last year’s rating of 82% (industry average 71%)."

Call Twice - Leads Should be Followed up More Frequently

When following up leads an international lead-generation business says that most financial advisers only call the lead once. Even though the client didn't answer, or they got voicemail, they did not attempt to contact the client again.

You can imagine the scene - an adviser looking at the lead, makes the call, leaves a message and rationalises not calling back with a shrug 'all these leads are poor quality.' Yet apparently the conversion rate if you make a second call is 87% higher, according to Velocify.

Local call centres say that they attempt to contact a lead on three occasions at different times of the day, and that they do leave messages - interested customers will call back.

Connect to Quotemonster on LinkedIn

A new button has been added to the bottom right-hand corner of the landing page at www.quotemonster.co.nz - click on it and it will connect you to our LinkedIn page. That means we can hear each others news on LinkedIn, give endorsements, and generally stay in touch better.

Here is a hug arrow pointing to where you can find the button! 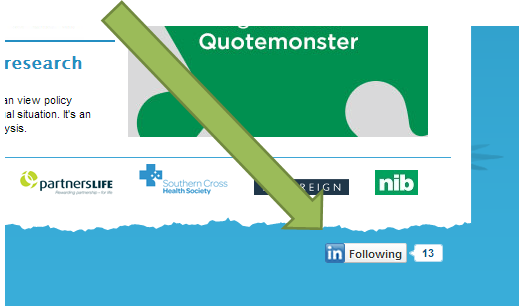 AMP's Jack Regan makes a number of useful comments about the distribution of life insurance in their profit announcement. Link.

The US National Underwriter has put out this brief list which highlights nine things you will know, but most consumers don't know, about insurance. Link.

Richard Verdin, Chief Marketing Officer, at RGA in the UK, writing in Money Marketing makes some uncomfortable points about the last round of regulation in the UK.

These are what he calls his hand-picked facts:

What is particularly distressing is that everyone made all the right noises about how following best practice would lead to an increase in risk sales. It hasn't.

Those may sound like 'good things' to say, and avoid the charge of 'negativity' but in future if experts actually care about customer access they will have to think a little more critically about the nature of the impacts. Since the goal of regulation was never to reduce, in aggregatte, the amount of protection being sold, then there must be a better way. Being clear that we need to look for a better way, even if it means criticising the current regulatory format, is as much a civic duty as reporting breaches that harm consumers.

Version 71 of the Premium Comparison database have been uploaded to Dropbox for subscribers, or made available in your preferred delivery mechanism.

Updated prices for Asteron LOE, LOE Plus and Mortgage Protection. Please note that we are now including Increasing Claim for Asteron Mortgage Protection, which wasn't included previously. The prices have gone up by approx. 5% but the Rate Change tables are showing larger increases due to this change. When the other companies do pricing updates in the future we will endeavour to quote the equivalent prices - but there remains a number of Mortgage Repayment Covers which do not include an indexation option.

Quotemonster is on the road again - with the huge number of new sign ups we are running another introduction session.

This session will provide an overview of the research approach used and illustrate the best approach on using the QuoteMonster Research Platform. Great opportunity to ask questions, learn what is new and as always some interesting statistics.

It’s a free, fast, and helpful one-hour session which will pay you dividends many times over in faster quotes, better reports, more in-depth research and solving all manner of minor mysteries in the quote tool.

You can read the details of the report here.

I am big supporter of the presence of a vibrant home equity release market as a vital part of a package of financial options that should be available to people in retirement. It would be nice if we had a better annuity marketplace too.