Four Proposed Changes to the FSLAB

Here are four changes to the FSLAB that I would like to see - unashamedly not all my own work, but arise from discussions with others also engaged in the proposed law changes:

In pleading the case for these changes none appears that complex to draft - except perhaps the second half of the second point.

7 Things Your Friend With Cancer Wants You to Do

Julieann Selden has written this article about the things that someone close to you going through cancer could really benefit from. Seldon lists seven easy things you could do that might mean the world to your friend with cancer.

'The numbers of advisers engaged in churning life insurance policies may be much lower than expected, according to ASIC, which has claimed recent data gathering activities are providing a clearer picture on the issue.' Click here to read more.

While ASIC originally thought that there were probably about 500 advisers that might be engaged in churn, according to ASIC Deputy Chair, Peter Kell, they have revised that view: "after applying a range of filters, it’s allowed us to work that down to a much, much smaller number... " and goes on to say "...It’s less than 10 per cent of the initial pool of advisers where there may be a much greater risk.”

Fifty advisers in the whole of the Australian advice market. Try as you might, the long-run lapse problem in Australia cannot be fixed by getting rid of fifty advisers. That's not to say that if those advisers may not deserve to be axed. If they are systematically abusing the trust their clients have placed in them for personal gain, non-disclosing, and causing actual harm all the way, then that is something we want the regulator to act on.

But imagine you are an insurance sector analyst contemplating the industry, worried about recommending 'buy' or 'sell' or 'hold.' You know that the industry has a lapse problem, and that problem has been getting worse. Maybe you thought that reducing commissions and a churn investigation were going to fix all of that. Right now it doesn't look like the scale of the adviser component of the problem is sufficient to address the wider lapse issue. It will help, it's probably worth doing, but it isn't sufficient. If you were analysing these companies then you might want to know whether management had considered the other potential drivers of lapse activity and were taking sufficient steps to tackle those.

One is rate-for-age pricing, which guarantees premium hikes that can be five to ten times the rise in average incomes for clients in their late forties and fifties. Allied to this is the question of pricing as a whole, of which commission is a significant part, but so is efficiency, and particularly the systems and administration centres which have suffered for lack of investments.

Another is consumerism, which has empowered consumers to act more aggressively in their own self-interest: shopping around and switching are now considered to be good shopping habits. Those same habits, for reasons somewhat special to insurance (medical underwriting), can undermine your coverage. Consumers don't appear to know that, despite the vast resources available to insurers to educate their clients.

The companies best at tackling the challenges of product design, efficiency, technology, and communication will emerge as the winners in the marketplace over the next five to ten years. Whatever channels they sell through.

As an aside, it is nice to see the data driven approach that the FMA took is being used by ASIC as well. We can all tell stories, but the answers are in the data. Thinking of data, do go and check out the RiskInfo.com article as there is a series of excellent links on lapse / churn related issues.

QPR in the News

Nice to see Quality Product Research quoted in the news, you can check out the details in this article by Diana Clement on health insurance.

The Definition of Financial Advice

The new draft law has re-opened the conflict on the definition of financial advice. I give it a new look too in my recent piece over at goodreturns.

Death by suicide too common - a good article packed with data

This article by Tina Law on stuff.co.nz provides a refreshingly high quantity of data. The only thing I don't like about it is the headline "National suicide numbers rise three years in a row" that is true, but due to population growth lots of things rise year on year. But Ms Low quickly evens the balance by showing prominently a chart of the rate of suicides per 100,000 of population. Plus, the undeniable fact is that by international comparison, and comparison with other causes of death for working age kiwis, this is a shocking problem that needs more work.

The FMA has just published its annual corporate plan. From the media release:

The activities in the plan are designed to respond to the areas of risk identified in the Strategic Risk Outlook, published in February this year. The plan includes:

• our organisational objectives and planned activities for 2017/18
• the outcomes we seek to achieve through our work
• future focus areas
• the regulated sectors and financial markets our work will impact
• how we intend to measure our success and progress during the year.

If you, like me, needed a reminder as to how this document fits in with other documents, such as the annual report, or strategic risks outlook, the FMA provides this handy graphic: 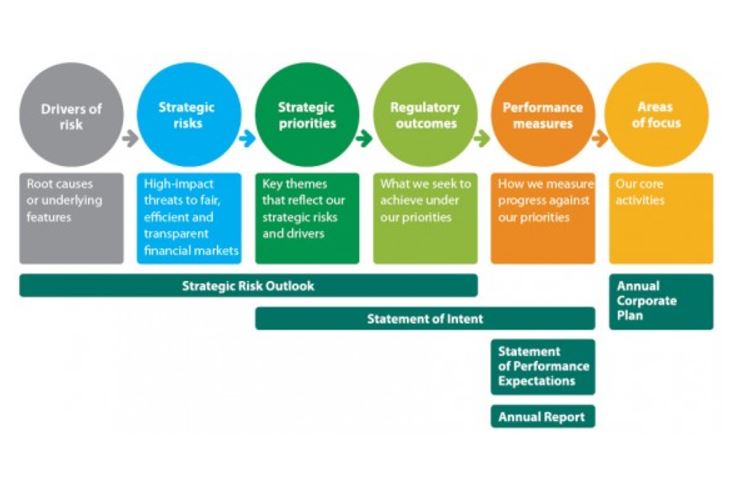 You can reach the annual corporate plan at this link.

Australia: Banks and their Insurance Businesses

Although I have a convention of tagging news from Australia in the headline, this post has a great deal of relevance to our market, as it accounts for the fact that insurers representing nearly half of the market are for sale. The AFR has a detailed piece which I will make a few quotes from below, but you can find at this link, on why they think that banks owning insurance companies has become a headache - hence the rush to sell them. First, the AFR says that the news CommInsure was for sale was greeted with indifference by the market because of the 'state of the industry, which has been hammered by rising lapse rates and more lately, soaring claims'.

Obviously, the situation in Australia has been quite different for a number of insurers, to the experience of the same brands in New Zealand. Sovereign is not CommInsure, Asteron Life in New Zealand contributes well to Suncorp's group profit. Overall lapse rates and claims performance differ between the countries, in part, for structural reasons. We don't have a lot of TPD in superannuation, which appears to have caused some particular problems in Australia.

The AFR went on to list the companies sold: NAB sold to Nippon Life, Macquarie to Zurich. Then to list those for sale - they name ANZ, the life businesses of Suncorp, and quote AMP as saying it is "open-minded" - although I always felt that's the proper attitude of any business, pretty much all the time. But because these businesses are often quite closely linked behind the scenes (systems, staff, brands, reinsurance, and more). Therefore, if the Australian business is sold, it is common that the New Zealand one goes with it. Not all businesses will be sold, of course. In addition, when a business is under review sometimes a bias towards a sale can uncover an opportunity to buy. But some transactions seem likely in the coming year. If the number was two, or three, it would represent an incredible period of change.

AFR then contemplates the question - how did it come to this? You can check out their full article for details, but two issues they list are worth contrasting with the situation in New Zealand.

The first is the ASIC report that "found 37 per cent of advice on life insurance was in breach of the law and almost half failed when high upfront commissions were charged". I read that report and it has some problems, small sample sizes, and arguable definitions of what constitutes 'failing' advice. But here in New Zealand we have an advice law which barely even makes the comparison possible. Since a written record of advice is not explicitly required under our current law it may not be possible to conduct the same kind of investigation here. But the FMA has gamely tried, and by analysing five years of data they have found a strong statistical link between incentive travel offered by insurers and higher new business and lapse rates. The insurer's might say, 'well that's what we were hoping for when we offered the incentive' but that brings us back to the quality of advice.

The second is the issue of poor systems - some so poor, AFR says, that they cannot provide good information, or hamper the ability of the insurer to report, or provide effective claims service. That sounds familiar too - and some of the systems will be common across the two markets. Replacing those systems requires new capital. So even after a transaction, that will not be the end to the change in the market. It will be the beginning.

Claims data from nib shows large differences in the cost of common surgeries around the country. nib have complied the data from previous claims costs ahead of the launch of their First Choice network.

nib's Group Executive, Benefits and Provider Relations, Justin Vaughan had this to say " But we can see straight away there are cost variations which come solely because the physicians involved and the facilities involved are charging certain fees. They are the ones who control those fees - which is why we have picked up these variations between regions. As yet we have not found any evidence that those higher fees result in better quality health care." Click here to read more.

Of course, there is the fact that property is so much more expensive in Auckland that it would tend to make the cost of premises significantly higher - and the cost of staff, because they need to live in a house (rented or owned). That would explain some significant differences, but as I went through the examples - one off memory where the cost in Wellington was nearly 90% more than the national average I thought: I bet that's simply because they can charge more.