Statistics New Zealand has published details of a further decline in the fertility rate - which is now solidly below replacement rate. It is worth thinking about the impact that this key demographic has, in conjunction with another more controversial one (net migration) on the provision of services such as health and superannuation.

On the estimates of only a few years ago, when net migration was negative, and immigration lower, the sum around the ageing population looked really bad. A few years of high net migration (which is mostly younger folk, but working age) has probably improved them somewhat - without having done the numbers my is that it kicks the can down the road a few years, allowing the coalition government the luxury of extending National's promise not to increase the age of eligibility for New Zealand Superanuation for the duration of this parliament, at least.

The future could see the trend stay low, or achieve a slow recovery as younger people who have deferred starting a family begin to start families in their early thirties. Either way, there are probably long-term impacts on retirement savings policy and health service provision to consider. But while net migration creates infrastructure headaches, it provides some valuable demographic breathing space to other problems.

New Zealand’s total fertility rate in 2017 was down to 1.81 births per woman, its lowest recorded level, Stats NZ said today. This means that based on birth rates in 2017, New Zealand women would average 1.81 births over their lifetime.

Although the number of births increased slightly (59,610 live births were registered in 2017, up 180 from 2016), the fertility rate still decreased. This related to the increased population size rather than fewer babies being born.

“While the fertility rate is now the lowest ever seen, the total New Zealand population continues to grow, driven by near-record levels of migration in 2017,” population statistics senior manager Peter Dolan said.

The lower fertility rate may lead to reduced population growth if it stays below the ‘replacement level’ of approximately 2.1. The replacement level reflects the average number of babies that women would need to have over their lifetime to maintain the size of the population. The total fertility rate has only dropped below 1.90 births three times before, most recently to 1.87 in 2016. 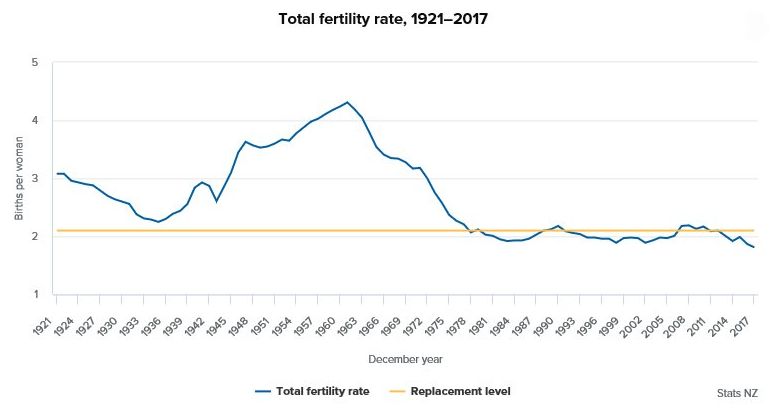 The reduction in birth rates since 2008 has been mainly driven by trends among women aged 15–29 years, whose birth rates are now at record lows.