The FMA has published a supervision insight report that outlines its supervision activity. After 18 months of supervision, the FMA found that the majority of adviser businesses have been open, engaged and cooperative although it found that some firms weren’t disclosing important information and following requirements.

“The Financial Markets Authority (FMA) has released a report on its supervision activity over the past 18 months, and said that most adviser firms have been “open, engaged and cooperative” during its monitoring reviews.

However, it said that some firms were not disclosing important information, and were not taking the action required by the regulator. In one instance, it had to issue a notice under the FMA Act 2001 to access information which a firm had failed to provide.”

The report highlighted weaknesses in advice disclosure practices of some AFA and QFE. Rob Everett, FMA CEO noted that some of the issues identified were concerning and that the FMA would be taking stronger action when shortfalls aren’t addressed.

FMA chief executive Rob Everett said some of the issues identified in the report were “concerning,” and that the regulator would need to take stronger action where shortfalls were not properly addressed.

“We saw much good progress over the last year but were unimpressed by attitudes from one or two firms that suggested to us that they saw good conduct as something that only needs to be demonstrated when we visit,” Everett said.”

John Botica, director of market engagement said that advisers have an important role to play in the COVID-19 recovery process and the new regime will ensure corners aren’t cut as it is the industry’s responsibility to ensure New Zealanders are financially well informed.

“Director of market engagement John Botica said that advisers have a crucial role to play in the resilience of New Zealanders throughout the COVID-19 crisis, and that the new financial advice regime will not allow for “cutting corners.”

“Many New Zealanders are under insured, under saved and have too much personal debt,” Botica commented.

“It is our job, together, to guide consumers to make better decisions about their financial futures.” Click here to read more 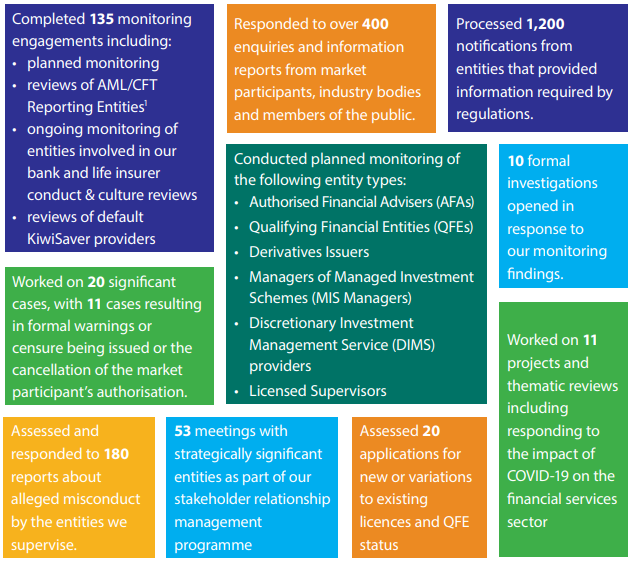 FMA: No excuses for shoddy conduct