Stats NZ announce that population growth appears to have accelerated.

These are the first population estimates to fully incorporate the 2018 Census and 2018 Post-enumeration survey (PES) results.

"One of the purposes of running a census is to recalibrate national and subnational population estimates," population insights senior manager Brooke Theyers said.

"The census coverage results from the 2018 PES, also released today, are crucial to ensure the population estimates are the best possible measure of how many people live in every community across New Zealand."

This is a normal revision of population estimates that takes place after census and PES results are available. Estimates back to 2013 have now been revised. Estimates after 30 June 2018 now use the 2018-base estimated resident population as the starting-point.

New Zealand's resident population based on the 2018 Census is estimated to be 4,900,600 at 30 June 2018. This is higher by 60,000 than the previous estimate at that date. The population is estimated to have eclipsed 5 million in September 2019. Provisional estimates initially indicated the milestone was reached in March 2020 (see New Zealand’s population passes 5 million).

"The updated estimates confirm that the growth of New Zealand's population has been relatively high, averaging 1.9 percent a year in the 7 years ended June 2020," Mrs Theyers said.

"Growth in the previous 20 years averaged 1.1 percent a year."

In updating market dynamics for modelling future opportunities the normally resident population is the defining variable for the boundary of the market. Growth means we expect added opportunity for insurers, although we look for that in the working age population sub-segment. 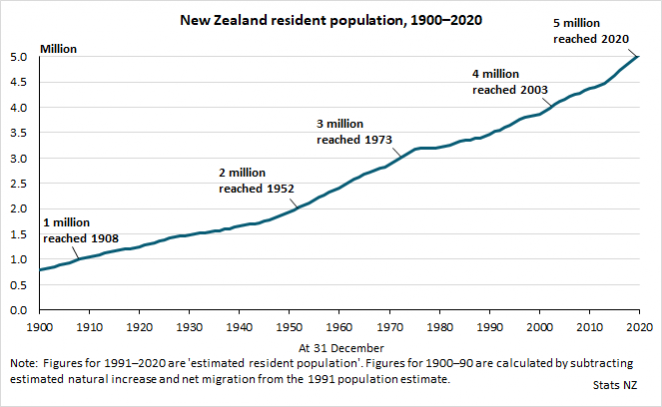