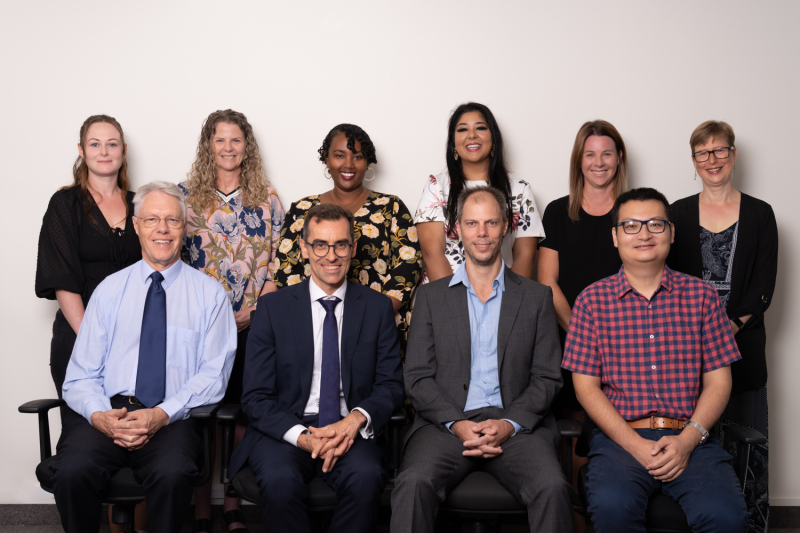 This is your Quotemonster and Chatswood work team: I am so proud to work with such a great group of people. They have worked incredibly hard over the last few weeks as we had to make a lot of changes to meet new requirements for customers by 15 March. Since then we’ve trained hundreds of clients in updated processes. It has been so very busy and the team has stepped up.
From left to right, back row first: Melissa Waddel, our super new administrator; Treena Jordan, new Quotemonster GM, who starts with us on the 12th - we’re really looking forward to Treena joining us; Jerusalem Hibru who has been doing some great marketing work making us busier than ever. Doreen Dutt, researcher, who has also been so supportive of all the extra client calls for help. Kelly Pulham, who has been crucial to all the extra training and changes we’ve been doing. Fran, of course, who as well as business analyst and data work has taken on more leadership responsibility.
Front row, Rob Dowler compliance support and advice extraordinaire; yours truly; Ed Foster, does great data science work, and Albert Liu who is also an accomplished data scientist and IT leader. It has been so busy but working with this crew is a real privilege. We have big plans and lots of exciting stuff coming up.

31 Mar 2021 – RBNZ announced that it is easing the dividend restrictions placed on retail banks at the height of the COVID-19 pandemic, allowing banks to pay up to a maximum of 50% of their earnings as dividends to their shareholders. The 50% dividend restriction will remain in place until 1 July 2022, at which point the Reserve Bank intends to normalise the dividend settings by removing the restrictions entirely (subject to no significant worsening in economic conditions). https://www.rbnz.govt.nz/news/2021/03/reserve-bank-retains-some-dividend-restrictions-and-expects-banks-to-be-prudent

A north-shore-based insurance advice business is seeking an experienced administrator - a brief description of the role is below. If you are interested to learn more please email Melissa.Waddel@Chatswood.co.nz

The role will consist of 20 hours per week from 9.30am-1.30pm Monday-Friday, although we can be flexible with start and finish times for the right person.

Daily tasks will include, but are not limited to:

nib on why customers should consider comprehensive health insurance, and more daily news

Your clients choose who they receive treatment from, and alongside their GP or specialist, they decide where and when. Having access to more options helps reduce uncertainty and enables them to make plans to minimise related disruptions caused in their lives.

It is not uncommon to spend months waiting in the public health system before receiving treatment. While your client is waiting, their health may deteriorate further, and secondary issues could develop. Access to private healthcare, afforded through health insurance, can significantly reduce waiting times, creating greater peace of mind.

Poor health could require needing to take time off work to recover. This could result in lost income for your client, as well as any of their family members who may need to support them. Furthermore, without private health insurance, they may have to cover the cost of private treatment themselves, creating additional financial burden.

Health practices and treatments are advancing rapidly. Private health insurance can give your clients access to treatments that they may not have otherwise been able to afford.

Prevention is better than dealing with illness and discomfort. With the nib Proactive Health Option, it’s easier for your clients to stay healthy, and to enjoy life and all the things they have worked hard for. They’ll be covered for screening, such as breast screening, prostate screening, heart screening and mole mapping, allergy testing and vaccinations, gym memberships, weight loss management programmes, quit smoking programmes and routine health checks.” Click here to read more

Partners Life: Partners Life is asking FAPs to login to the FSPR for the FAP and engage financial advisers by March 31 to ensure Partners Life has the latest list from the FSPR

24 Mar 2021 – RBNZ announced that it had made a number of amendment orders to revise the requirements for banks’ published disclosure statements. https://www.rbnz.govt.nz/regulation-and-supervision/banks/consultations-and-policy-initiatives/completed-policy-development/public-disclosure-of-bank-breaches

29 Mar 2021 – RBNZ advised that it had submitted a response to the Climate Change Commission’s Climate Action for Aotearoa consultation. https://www.rbnz.govt.nz/news/2021/03/reserve-bank-responds-to-call-for-climate-change-consultation

Wealthpoint has introduced the launch of the standalone General Insurance brokerage. Wealthpoint CEO Simon Manning has said that Wealthpoint General Insurance was formed to support advisers expand general insurance services as well as expanding supplier members with a focus on growing commercial, property and liability business lines. Wealthpoint General Insurance is based on the longstanding relationship with Vero and AMP General as well as new arrangements with Delta and Star Insurance. Manning has said that the dealer group has been considering this for a while as general insurance has always been a significant part of business for members. Creating a standalone brokerage means that Wealthpoint can form a working relationship with larger insurers under the IAG brand. Wealthpoint has partnered with Steadfast to form the new brokerage.

“The dealer group, formed from the former AMP advisers association, launched Wealthpoint General Insurance, a standalone brokerage for its 50 member businesses to transact through.

He said Wealthpoint was keen to expand the range of suppliers members could deal with, particularly for commercial, property and liability business lines.

Successful long-term relationships with AMP General and Vero Insurance were still in place and new supplier arrangements with specialist insurers such as Delta and Star Insurance were introduced for Wealthpoint members in the past year.

But, Manning said Wealthpoint was conscious that access to some of the larger insurers, including those operating under IAG brands, was only possible if structured through a standalone brokerage.

"General insurance has always been a pretty big part of our members' businesses and it's been something we have been thinking about for a long time," Manning said.

"There are a few unknowns about how much it will be used as it is only an option for our businesses who want to expand their GI operations or look to bring in more expertise."

Manning said uptake had been encouraging since they began offering its expanded services at the start of this month and "if we overshoot on our expectations then we will have to look for some more people pretty quickly".

"At the moment we are a small staff and are monitoring things closely but the phones have been ringing, so it's pretty encouraging."

He said while some Wealthpoint member businesses had explored the option of setting up their own brokerages, there were significant barriers such as high setup costs, lack of scale at member level and potential regulatory risks.

He said with that in mind Wealthpoint had joined forces with Auckland-based brokers Steadfast.

"They have been extremely helpful, they are very professional and have arrangements with virtually all of the market so that's helped us form alliances with all of the providers we want to.

"They have given us a really good tech platform as well.

"Now it's up to us working through the list of insurers and working with them to bring them onstream. Getting agreements in place will take time and we are being quite methodical working through that." Click here to read more 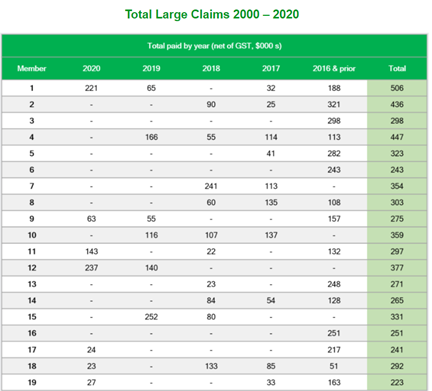 Four Japanese rules if you want to live past 100

The BBC has this lovely video about centenarians and their tips for a ling life. https://www.bbc.com/reel/video/p07xdbyb/four-japanese-rules-to-live-past-100

Legal and regulatory update for the life and health sector

25 Mar 2021 – FMA advised of the release of the International Forum of Independent Audit Regulators (IFIAR) ninth annual survey of Members’ inspection results for the 2020 year. IFIAR is a membership organisation of 54 independent audit regulators, including the Financial Markets Authority (FMA). https://www.fma.govt.nz/news-and-resources/media-releases/ifiar-releases-2020-survey-of-inspection-findings/

24 Mar 2021 – Parliament completed the third reading for the Taxation (Annual Rates for 2020–21, Feasibility Expenditure, and Remedial Matters) Bill. https://www.parliament.nz/en/pb/bills-and-laws/bills-proposed-laws/document/BILL_98047/taxation-annual-rates-for-2020-21-feasibility-expenditure The Government also announced that it intends to remove interest deductions on residential properties (except for new builds), and will consult on the details of this measure. https://taxpolicy.ird.govt.nz/news/2021/2021-03-23-government-property-announcements

Fidelity Life CEO Melissa Cantell has said the insurer is looking to improve current legacy systems to ensure a seamless process for advisers. Cantell has said that legacy systems are not equipped with the technology to meet business and customer needs. Cantell notes that although they have a lot of information, there is no way of extracting useful insights. To minimise manual work for employees and to improve adviser interactions, Fidelity Life is looking to introduce a new core platform later this year. Fidelity Life has been working on the new platform for the last few years. The majority of Fidelity Life’s business will be moved to the new platform. The change is expected to change the way Fidelity Life works with advisers. Internal and external trials of the new platform have been positive.

“Research has shown repeatedly that New Zealanders who get financial advice end up better off. However, poor legacy systems have often been a pain point for advisers dealing with insurers - something which Fidelity Life CEO Melissa Cantell said her company is looking to change quickly.

“My experience of many industries is that everyone has a technology challenge in some way, shape or form, but insurance and financial services seems to have more than many,” Cantell commented.

“There are many old legacy systems that were not built with today’s businesses or customers in mind, and we’re not any different to anyone else.”

“The old systems are just not fit for purpose any more, and they’re hard to get data out of - we’ve got so much information, but the insights just aren’t there because it’s so hard to get it out,” she explained.

“It’s hard for our people to work with lots of manual processes, which means more time handling process and less time helping customers. Then you have our advisers who are trying to connect with us, and it’s imperfect because our world isn’t great, and theirs is somewhere on their own spectrum.”

Fidelity Life is looking to roll out a new technology platform from the middle of this year - something Cantell said has been a significant project for the insurer for a number of years now, and will allow advisers to work with Fidelity Life on a ‘whole other level.’

“We have a new core platform which will have us migrating a big chunk of our business on to a brand new, clean, built-for-us platform,” Cantell said. “We’re moving everything across, and our entire on-sale book will be on that new platform.”

“It has many components to it, but one of the things we’re particularly excited about is our new adviser portal,” she added.

“The way our advisers work with us will be on a whole other level than it is now. Once that’s there and we’re clean, tidy and not managing the complexity of our own internal systems, we’ll start to think about what else we can do beyond that.

“We’ve already piloted the platform on part of our business internally and externally, and it’s all been going well, so we’ll soon be turning it on for everything.” Click here to read more

Professional IQ: Jail time for breaching NZ's cartel laws from April 2021 - what you need to know