The FSC has announced that the FSC Diversity and Inclusion Committee will be hosting an International Women’s Day celebration in association with Te Ara Ahunga Ora Retirement Commission. The event will be headlined by Hilary Barry and will also include Jane Wrightson, Nadine Tereora, and Gen Mora.

“The FSC is delighted to invite you to a special event to celebrate International Women’s Day and to launch an exciting new campaign we are running in association with Te Ara Ahunga Ora Retirement Commission.

Featuring a keynote from one of NZ's favourite TV personalities Hilary Barry along with a panel of incredible wāhine:

Hosted by FSC Diversity and Inclusion Committee Co-Chairs Kristy Redfern and Tracey Cross, and AA General Manager Ana-Marie Lockyer, this is a lineup you don’t want to miss, so register now.”

nib: nib Group has committed $20,000 in funding its Footprints partner Plan International Australia to help with the Tonga volcanic eruption and tsunami

Southern Cross: The energy behind the energy: taking care of the Unison team

Financial Advice: How credit and affordability reports can enable a better customer experience and a more informed consumer

FYI: Are you looking to compare Funeral plans?

Here is a handy hint for Research and Advicemonster subscribers!

If you're looking to compare a Funeral Plan, you can access our static ratings and policy documents directly on Quotemonster. 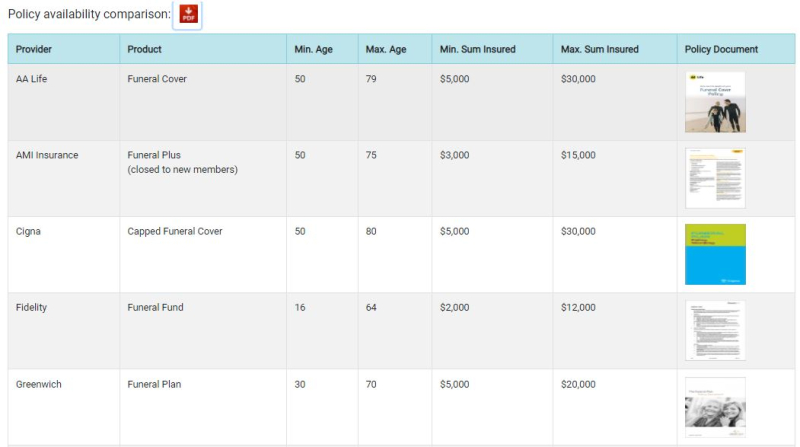 QPR subscribers have just received the latest database version (138) it is also live on Quotemonster, the changes in this version include:

The availability of health insurance for transgender individuals was brought forward to the Finance and Expenditure Committee in June 2019 in the form of a petition. Elizabeth Poucher, the driver of the petition, stated that transgender women are unable to get the same level of cover as cisgender women.

“Elizabeth Poucher brought a petition asking for the House to conduct an inquiry into the availability of health insurance for transgender people's care related to transitioning.

In response, Roger Styles, Health Funds Association CEO has said that insurers look to offer affordable products and that transgender care was often excluded due to high costs associated with transitioning. For this reason, Styles says that exclusions are not discrimination against the transgender community.

“Health Funds Association chief executive Roger Styles said insurers had to be able to offer an affordable product that was appealing to people to voluntarily purchase.

Transgender care was excluded because of the high cost of the transition process, he said, and the risk of adverse selection. People who thought they might transition would take out cover that would pay for it, loading insurers with extra risk.

He said insurers did not agree with Poucher that this was discrimination.” Click here to read more

Below is a press release from the FMA on business debt hibernation.

“Last week, the Government passed the COVID-19 Response (Further Management Measures) Legislation Act 2020, which introduced the business debt hibernation (BDH) scheme. Business debt hibernation may help eligible businesses affected by COVID-19 manage their existing debts until they can start trading normally again. For example, businesses may agree with creditors to delay repaying some of their debt.

BDH is available to a wide range of businesses (including companies, trusts and partnerships), some of which are regulated by the FMA. BDH does not extend to registered banks, licensed insurers, non-bank deposit takers, licensed derivatives issuers, operators of designated settlement systems or sole traders.

Conditions to enter and remain in BDH include director approval, notice to the relevant Registrar, and creditor agreement. These and other conditions that must be satisfied are set out in Schedule 13 of the Companies Act 1993.”

Reconciling wants to needs my latest on Goodreturns.co.nz

FMA: Insurance, advisers have stepped up

We have uploaded the latest product research database (version 12_7) onto Quotemonster and distributed it to subscribers. This version includes the following changes:

Jason Myers, NZ AIDS Foundation CEO, has stated that AA’s life policy clause excluding HIV/Aids related deaths is discriminatory.  He continues by stating that it is an outdated view.  Mark Savage, AA Life General Manager, has said that AA needs to exclude conditions or lifestyle factors that the underwriting process will not give them enough information about. But Myers argues AA's rationale doesn't make sense, as heart disease, lung cancer, diabetes and stroke are among the diseases most likely to kill New Zealanders, but they are not excluded. Click here to read more.

I suspect that this is really an historical issue. When HIV/AIDS was really an unknown, it was excluded because no one really knew how bad the disease could become, across the population as a whole. New Zealand is fortunate that measures to contain the spread have been successful, and measures to prevent transmission have kept the number of cases low, and the impact on people with the disease manageable. It also means that the impact on death rates is negligible. That means that some insurers - such as AIA, for example - feel comfortable enough to include cover for HIV even in their medical insurance contracts.

On the 10th of October AA launched a new suite of pet insurance products. 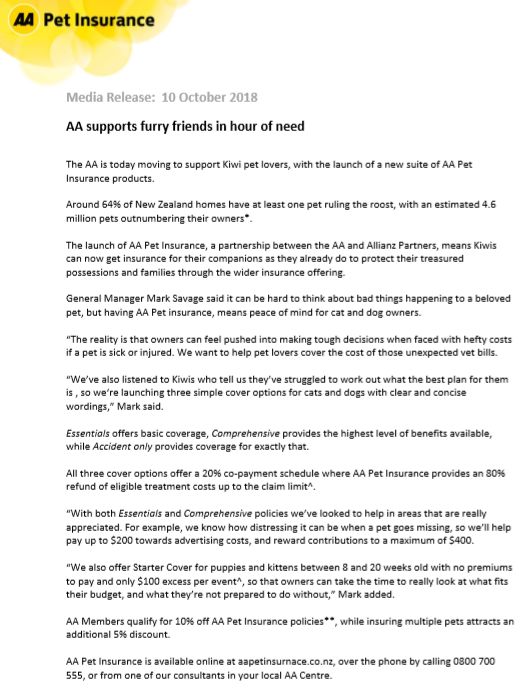 AA Insurance is listed as the 4th most reputable New Zealand business. That's quite a feat, and nice to see an insurer make it. Congratulations folks!

Below is an outline of the banks and other direct providers with a map as to which benefits and options they offer.

If you are trying to do a product comparison on Quotemonster with any of the companies below and they are not appearing, chances are you are quoting a benefit or option they do not offer. 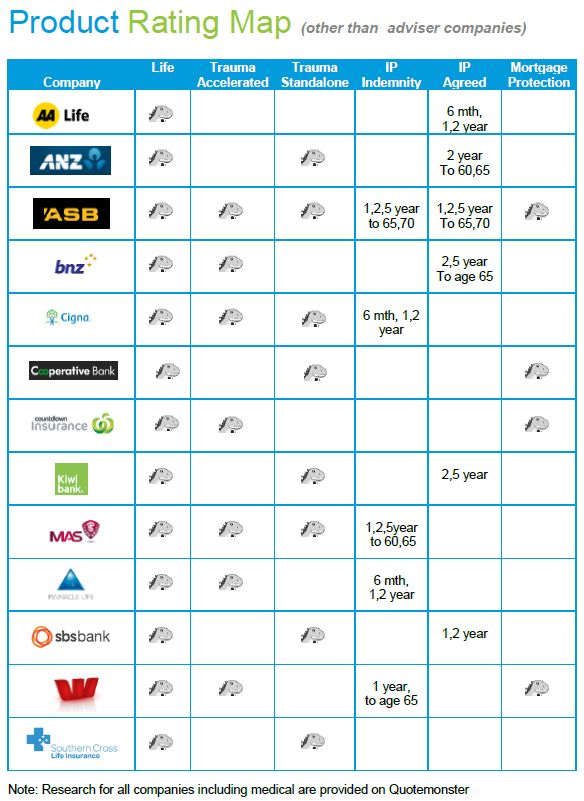