Legal and Regulatory Update for the Life and Health Insurance Sector

6 Oct 2021 – Law Commission launched a review of the law relating to adult decision-making capacity and published the Terms of Reference that will guide the review. This may have a bearing on how you identify and help clients that may be vulnerable in some way, some disabled clients, as well as those of you that may work with very elderly clients. There will be a public consultation process in 2022 and an intent to report to the Minister of Justice by the end of 2023. https://www.lawcom.govt.nz/media-release/law-commission-review-law-relating-adult-decision-making-capacity

6 Oct 2021 – MBIE announced that Government is seeking feedback on creating a Digital Strategy for New Zealand, with a closing date for feedback of 10 Nov 2021.

7 Oct 2021 – The Office of the Privacy Commissioner released a paper setting out the position of the Office on how the Privacy Act regulates bio-metrics. https://privacy.org.nz/publications/guidance-resources/biometrics-and-privacy/

28 Sept 2021 - The Government released the draft legislation outlining the details of the policy limiting the right to deduct interest costs on residential property investments.

16 Sept 2021 – ASIC in Australia released additional information for advice licensees and financial advisers who are authorised representatives to help them prepare for the commencement of the design and distribution obligations on 5 October 2021. https://asic.gov.au/about-asic/news-centre/news-items/what-the-financial-advice-industry-needs-to-know-about-the-design-and-distribution-obligations/

17 Sept 2021 - Parliament's Finance and Expenditure Committee released submissions made to the inquiry into the current and future nature, impact, and risks of cryptocurrencies. https://www.parliament.nz/en/pb/sc/submissions-and-advice/all?custom=INQ_111968

A great episode in the 100 women series focused on Money. You don't have to be a woman to enjoy it and get value from it. Anyone who expects to have women as clients to finds this market important - and I definitely do - may get value from the solid run through many of the basic issues from the perspective of the three experts interviewed:

13 Sept 2021 - RBNZ Over September RB are conducting a quantitative impact assessment exercise with selected insurers, to help understand the capital impacts of the draft interim solvency standard. They have published a template for feedback. https://www.rbnz.govt.nz/regulation-and-supervision/insurers/consultations-and-policy-development-for-insurers/active-policy-development/review-of-the-insurance-solvency-standards

14 Sept 2021 - MBIE sought submissions on whether to reissue the Addendum to the Responsible Lending Code, which elaborates on and offers guidance on how lender responsibility principles and lender responsibilities may be implemented by lenders while dealing with borrowers who have been impacted by COVID-19. Submissions close on 22 Sept 2021. https://www.mbie.govt.nz/have-your-say/addendum-to-the-responsible-lending-code-covid-19

14 Sept 2021 – Commerce Amendment Bill reported back to Parliament from the Select Committee. https://www.parliament.nz/en/pb/bills-and-laws/bills-proposed-laws/document/BILL_108304/commerce-amendment-bill

15 Sept 2021 – Privacy Commissioner issued a compliance notice to the Reserve Bank of New Zealand, triggered by a cyber-attack in December 2020.

Suicide rates in England and Wales during COVID-19, and more daily news

We hear a lot about how hard covid-19 control measures - especially those that restrict people to just home, or 'lockdowns' - are on mental health. Clearly, for some people, they are catastrophic: someone in a deteriorating relationship with a violent partner would clearly be devastated by a  stay-at-home order. While we have had some interim announcements on the subject here, which were reassuring, we haven't had much data to go on, until now. A recent study on suicide rates in England and Wales during the beginning of the COVID-19 pandemic helps to fill that gap.

The study was based on official death registrations from April to July 2020. It was found that there were fewer suicides than the previous year with 1,603 suicides on record, compared to 1,955 suicides in 2019. The study found the 2020 suicide rates were lower than the 5-year average (2015 to 2019 April to July period)  of 1,835 suicides. The study also revealed that men made up 73.9% of the recorded 1,603 suicide deaths between April and July 2020. The study has credited the lower suicide rate between April and July 2020 to a reduction in suicide during April 2020. That is encouraging news, it means we cannot automatically assume that stay-at-home orders will result in more suicides. On the other hand the UK plainly has a much better track record in dealing with mental health challenges that we have (compare suicide rates per 100,000 of population for evidence). Click here to read more 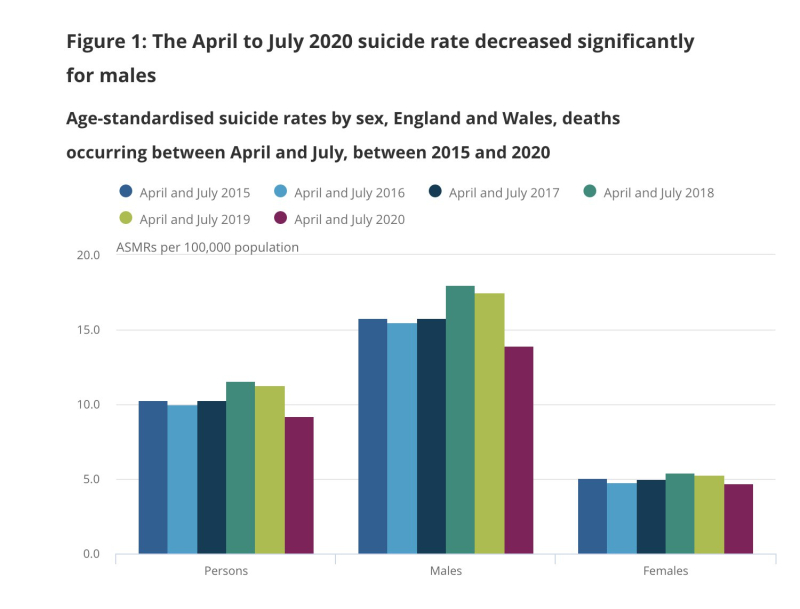 FSC Connect: Customers, complaints, code and claims - What have we learnt from COVID-19?

Income protection concerns for the self-employed and other daily news

In the UK, where the gig economy is more developed than it is here, policy makers are worried that varieties of social protections designed for full-time employment are not going to work so well in the 2st century labour market. These include pensions (to us, superannuation), holidays, and insurance. Income protection in particular is under the spotlight because, at the same time as self-employment is growing rapidly, it seems that income protection is shrinking rapidly. Income cover has become more and more restrictive for the self-employed as insurers have grappled with long-term claims with hard-to-pin-down signs and symptoms. This sounds familiar. In fact, it sounds like our future if the APRA changes mandated to ensure the sustainability of income protection eventually end up being adopted here. The essence of the problems with income protection for the self employed is a lack of flexibility in the product. That is exactly what insurers are struggling with too. If both want more flexibility it looks like there is room for a new kind of IP product for the self-employed.

Fidelity Life has advertised a new role for Head of Risk and Operational Compliance. More info and the Seek.co.nz link here: https://www.linkedin.com/posts/angelareddy_head-of-risk-operational-compliance-job-activity-6835715862239031296-rVZJ

Stuff published a handy guide to the interaction between ACC, health insurance, and harm if you get an allergic reaction to the vaccine against COVID-19 (a very rare eventuality, but there are some instances of this). Essentially, you are covered by ACC and your personal health insurance is unaffected. Link.

Myths and the metabolism

The BBC has a piece about the metabolism. If you were hanging onto a favoured excuse for a little mid-life weight gain, it may pay not to read this. You only really get a pass after age 60. For anyone interested in the ageing process, it is worth a read. Link.

The update provides an industry level view including showing premium growth and profitability by line of product. It clearly shows the serious problem with income protection contracts that has led to substantial changes being imposed by the regulator.

As a guide to the sector in Australian it is excellent. It is also an exemplar of how sector level information could be provided for the benefit of consumers, advisers, and the industry. Link.

25 Aug 2021 – FMA updated the list of Level 4 essential financial services. Some aspects of the life and health sector are included, but this is more restricted than previous definitions. https://www.fma.govt.nz/news-and-resources/covid-19/list-of-level-4-essential-services/