10 May 2022 – Government announced further Russian sanctions targeting disinformation and those responsible for cyber-attacks on Ukraine.

10 May 2022 – Third reading of the Protected Disclosures (Protection of Whistleblowers) Bill completed in Parliament, with the Ombudsman issuing a statement welcoming its passage.

10 May 2022 Committee stage of the Retail Payment System Bill completed in Parliament. https://www.parliament.nz/en/pb/bills-and-laws/bills-proposed-laws/document/BILL_116198/retail-payment-system-bill

11 May 2022 – Ministry of Business, Innovation and Employment released a consultation on a Draft Long-term Insights Briefing on the future of business for Aotearoa New Zealand, with submissions closing on 24 June 2022. The focus is on an exploration of 2 trends influencing productivity and wellbeing – purpose-led business and use of blockchain technology. https://www.mbie.govt.nz/have-your-say/draft-long-term-insights-briefing-on-the-future-of-business-for-aotearoa-new-zealand/

11 May 2022 – Third Reading of the Retail Payment System Bill completed in Parliament.

Bloomberg reports on research which finds that Covid may persist in the gut and, by inference, in other organs, for months. This is explored as a source of some of the symptoms of long-Covid, an over-arching term for all symptoms that last beyond the initial infection rather than a single discrete disorder:

In the largest study tracking SARS-CoV-2 RNA in feces and Covid symptoms, scientists at California’s Stanford University found that about half of infected patients shed traces of the virus in their waste in the week after infection and almost 4% patients still emit them seven months later. The researchers also linked coronavirus RNA in feces to gastric upsets, and concluded that SARS-CoV-2 likely directly infects the gastrointestinal tract, where it may hide out.

No one knows yet what causes the constellation of post-Covid symptoms, often termed long Covid, that afflict from 5% to 80% of people after a SARS-CoV-2 infection. It’s possible at least four different biological mechanisms lead to distinct conditions or subtypes of long Covid, said Akiko Iwasaki, a professor of immunobiology and molecular, cellular, and developmental biology at Yale University.

17 Nov 2021 – Under “FMA stories,” FMA released comment on its website on mandatory climate-related disclosures – a new regime for NZ and the FMA. https://www.fma.govt.nz/news-and-resources/fma-stories/mandatory-climate-related-disclosures-a-new-regime/

28 Apr 2021 – RBNZ published its guidance on what regulated entities should consider when building their cyber resilience - given their recent experience, and I mean this, the guidance is likely to be a fair reflection of their own practice and current approach. A high level guide for supervised organisations. https://www.rbnz.govt.nz/news/2021/04/reserve-bank-publishes-cyber-resilience-guidance

28 Jan 2021 – RBNZ released the results of a research report showing the Māori economy is increasingly diverse and opportunities remain for it to continue growing and reach its full potential. https://www.rbnz.govt.nz/news/2021/01/e-hauora-ana-e-matahuhua-ana-te-ohanga-maori-e-ai-ki-nga-rangahau

Fidelity Life has announced that it will be ending its Sharecare partnership. This change has been a result of COVID-19 affecting progress. Sharecare will continue to be available to existing users until 31 December 2020 although new challenges and other content won’t be available. All users will be contacted by Sharecare before the end of the year to discuss the next steps.

“While the app (and desktop version) are no longer available for new users through Fidelity Life, existing users can continue using Sharecare until 31 December - though there won’t be any new New Zealand content, including Challenges.

Sharecare will contact all registered users again before the end of the year regarding next steps beyond 31 December.

Ultimately, the economic impacts of Covid-19 have meant we haven’t been able to make the progress we’d originally planned for."

Cigna: Cigna announce double appointment to its board

IRD scam emails - an example of the type

Scam emails are becoming more sophisticated - but there are still some obvious ways to spot them: see link. 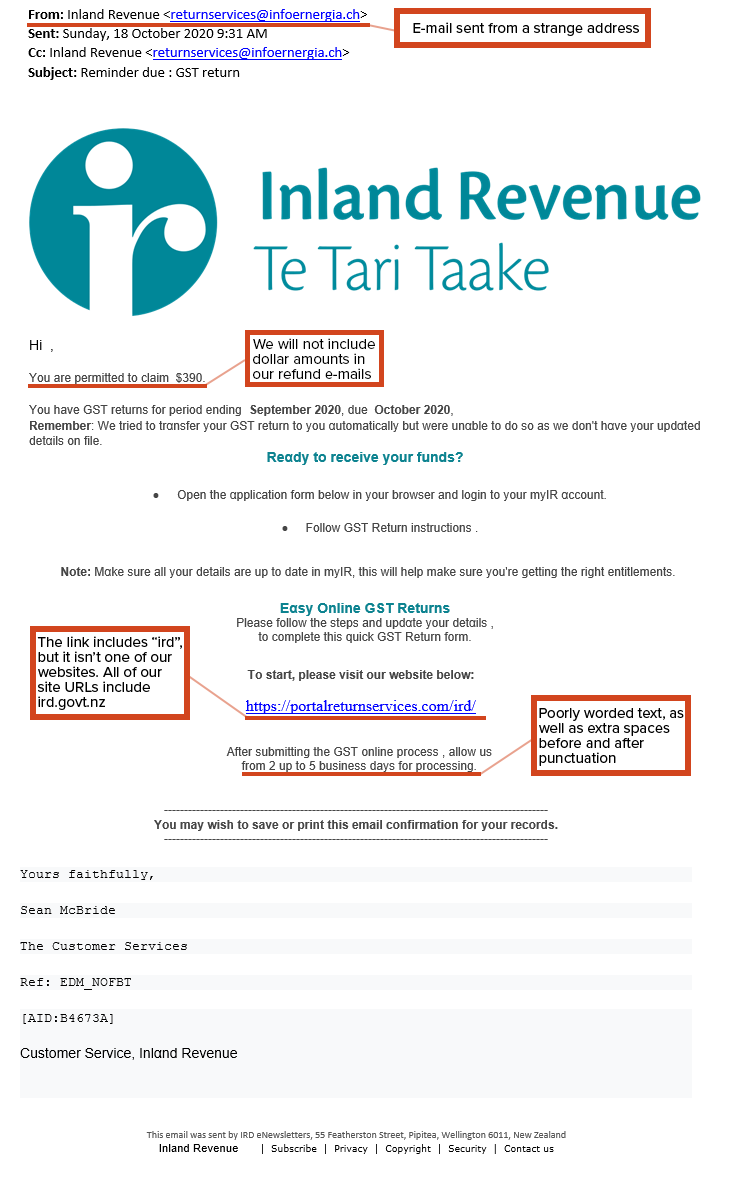 RBNZ recently published a guide on how to build cyber resilience. Deputy Governor and General Manager of Financial Stability Geoff Bascand noted that the cyber space has been identified as a significant source of operational risk for financial institutions. The guideline focuses on what RBNZ’s expectations are and uses material from national and international cybersecurity standards. Bascand announced that a draft guideline has been published and is open for feedback.

The cyber world has long been recognised as a significant source of operational risk for financial institutions, Deputy Governor and General Manager of Financial Stability Geoff Bascand says.

The draft guidance, which is open for feedback, outlines the Reserve Bank’s expectations around cyber resilience, and draws heavily from leading international and national cybersecurity standards and guidelines.

“As cyber risk continues to rise, there is growing awareness that cyber incidents could present risks to the stability of the entire financial system. Improving cyber resilience has become a key priority for prudential regulators around the world,” Mr Bascand says.”

RBNZ is set to run the consultation until 29 January 2021 as they believe the management of cyber resilience is a shared responsibility. The guideline works around related publications from other official agencies. After the 14 weeklong consultation period, RBNZ will release the final guideline.

“We recognise that managing cyber resilience is a shared responsibility and that it is important to collaborate and coordinate with all relevant stakeholders. The proposed guidance and our information collection plans have been designed to complement the work of other government agencies with a direct interest in promoting cyber resilience in the financial sector – including the Financial Markets Authority, the National Cyber Security Centre and the Computer Emergency Response Team.”

The consultation is open for 14 weeks and closes on 29 January 2021. The Reserve Bank will release the final guidance early next year.” Click here to read more

27 Aug 2020 – FMA announced the appointment of Paul Gregory to the newly created role of Director of Investment Management.

Todd Allan has been appointed as the Head of Adviser Distribution. This promotion comes after the departure of Craig Winterburn, who was the General Manager Distribution. In his new role Todd will be focused on supporting advisers.

“A key focus for Allan and his team of business managers and business account managers will be supporting advisers through a period of change.

“The new financial advice regime, conduct and culture changes and, more recently, Covid-19 are all having an impact on our business, our distribution partners and the broader industry.” Click here to read more

FSC webinar: Get In Shape Session 5: Hear directly from the Government and regulatory leaders delivering FSLAA

FSC webinar: FSC Connect - Insights from Journalists and the Media

FSC webinar: Get In Shape Session 6: An opportunity to redesign your advice process