Population and migration updates - significant changes due to COVID-19

Stats NZ has released some deaths and population figures which show the impact of the pandemic so far and the policies used to contain it.

First, we look at deaths. During the winter of 2020 after a long initial lock-down and the closing of borders mortality fell below historic trends and the containment measures cut deaths from a variety of causes (for example, winter viruses already in circulation, plus reduced accidents from reduced work).

Deaths in New Zealand increased to the highest on record in 2021, but this is expected as it reflects our aging population, Stats NZ said today.

Then we consider population. The closing of the border had a dramatic effect on migration. Although we know many New Zealanders wanted to return home - some permanently, most temporarily, to re-establish links with family and business - and that more than 200,000 passed through MIQ, the net effect was -3,900. That's right, we lost population during the pandemic due to migration. This was offset by natural increase:

During the year ended December 2021:

Insurance and home loans - the future of financial planning

In some respects investments advisers are streets ahead of insurance and home loans advisers. Older, wealthier, and with wealthier clients they also tend to have more fee-based businesses, and work from longer-established evidence-based models for advice. But insurance and home loans advice has plenty to celebrate, and that was reflected in the changing membership of Financial Advice New Zealand, highlighted by Chairperson Sue Brown in her recent speech. The younger adviser and more diverse membership Brown was happy to talk about comes mainly from the mortgage and insurance membership. In this advice sector barriers to entry are lower, and commissions enable the cash-strapped younger people, or return-to-work mothers looking for a career to fit around children, to become advisers. That diversity is important because if we want advice to be accessible to everyone. Some of that diversity will flow through into new ways of thinking and new offers and services to clients. That cohort of younger advisers will in turn develop the skills necessary to offer full financial planning and investment advice services.

Customers Know What They Want. Are Insurers Listening?

According to the recent Bain’s Customer Behavior and Loyalty in Insurance report Insurers are falling short on delivering value to  their customers. Click here to read more. 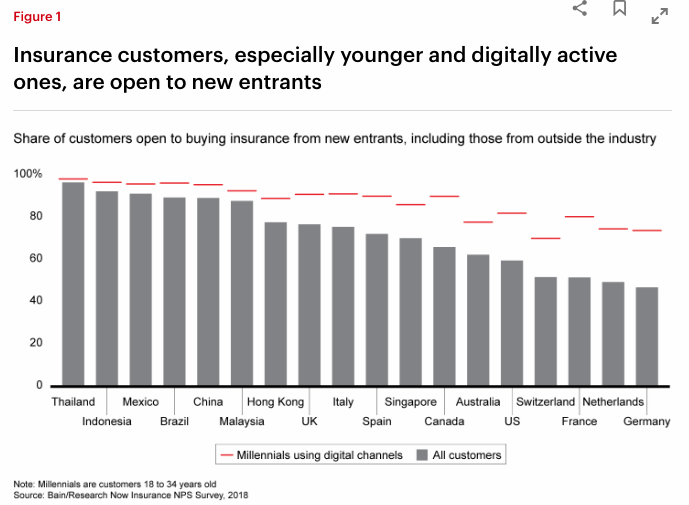 Why suicide is declining in many countries, and how to reduce it further

The Economist has this article on suicide. With New Zealand's relatively high rate (substantially higher than in the UK) we could do with some change.

How Japan can cope with the 100-year-life society

This article from The Economist discusses the issues facing Japan as they expect over half of Japanese babies are expected to live to 100. The impact of lengthening life can be seen all around us - in 1800 for a person to live to 50 was rare - the world over. Today, it happens more than not, even in some of the poorest places on earth. The changes to our industry appear not to be obvious, but that is probably because the changes are slow. Once, the very idea of trauma insurance, or disability income insurance, were seen as revolutionary. Today our worry is that the allocation of premium to life insurance is a problem - that money should really be spent on living benefits.