Losing money because of bias?

If we believe that people with Chinese cultural background don't buy insurance, when in fact they do, we tend not to try and offer our products and services to them - and so we leave out a big section of our market.

If we believe that women don't buy income protection insurance, and so we don't recommend it, then likewise, we miss out - and so do they.

Untested preconceptions about the market confound us all the time. The essence of the science of management is measurement. What we measure we can manage. The opposite of that is the tyranny of 'gut feel', which is little more than the accumulation of past experience - not all bad, just a lagging indicator which tends towards self-reinforcing views of the data. That's because if we don't try and sell women income protection we continue to experience a market in which few of our female clients buy income protection. It happens to all of us. Take this research, for example, reported by The Economist as evidence of bias in Facebook advertising algorithms. Perhaps an example of how you have to watch for bias in every stage of the marketing channel right through to the customer.

When you are planning the year ahead, keeping an eye on new trends may provide you with insights. At first, I thought I would write about advice automation when I read this article from the Sydney Morning Herald, but then I realised there may be a different angle. The article states that women are more likely to invest through robo-advisers than men.

'Six Park reveals that accounts held solely by women have more than doubled in recent months to sit at 40 per cent, up from 20 per cent in January. The firm delivers financial advice online using algorithms and technology in place of a human financial adviser.' Click here to read more.

It is fascinating, it felt to me that the issues of convenience would apply equally to men as to women - so there must be some other reason why women seem to take up robo-advice offers more than men. Maybe it is a reflection of the old-school, male dominated industry image. Of course, I might be wrong, this is probably insufficient data, but perhaps there is a business case for diversity. Which brings us back to planning. You might be able to figure this out on your own, but maybe you need some fresh perspectives. Bear in mind, if your next hire is just like all the other people you have ever hired, they aren't likely to take you to new places.

Reflecting the communities we serve

The Association of British Insurers has hosted a Dive In event in Edinburgh recently to highlight diversity and inclusion in the insurance industry. There are lots of good resources to be found at this website. Below is one, a few minutes with a partner of a major law firm talking about the importance of having a team that reflects the wide range of clients that they seek to serve.

Congratulations to the winners of Workplace Savings Awards and Financial Services Council Awards. I was delighted to see Treena Jordan of AIA win the diversity award, and Ben Rose of nib win innovation, and Jenn Dobinson who has done lots of work with the New Zealand Society of Actuaries, along with colleague Peter Kenny of AMP.

Treena Jordan's win in the diversity category is worth explaining. Treena championed the removal of the HIV / AIDS exclusion from AIA's medical insurance. Recognising that the situation with HIV and AIDS has changed and enabled this product decision was important, advocating to recognise that and enable the change for consumers - that's the hard part, and I am very glad it has been done. There is more to be done - especially in trauma policies on the same point, disclosure around gender and sexuality, and supporting access to our products for vulnerable people with changes like in-language resources, and improved access to high quality financial advice.

Nominees that I particularly want to acknowledge are:

Mark Banicevich, Partners Life - who has done some incredible work with the FSC, given a great deal of time and effort, and is very generous with his time and expertise. He has strong values focused on the development of a better market place - and demonstrated those at the FMA and now in his role at Partners Life. Partners Life has allowed him to serve the industry in that way is also worth recognising.

Robyn Bartlett, Asteron Life - has a strong track record in product innovation. This is both hard to achieve in personal risk insurance and requires commitment and dedication in a supportive environment. The development of Workability, the changes made to the wider income protection range is another good example, since the nomination was made the launch of the continuous trauma benefit is more evidence.

Here are some photos of a couple of the winners - please bear in mind they were taken at the gala dinner. 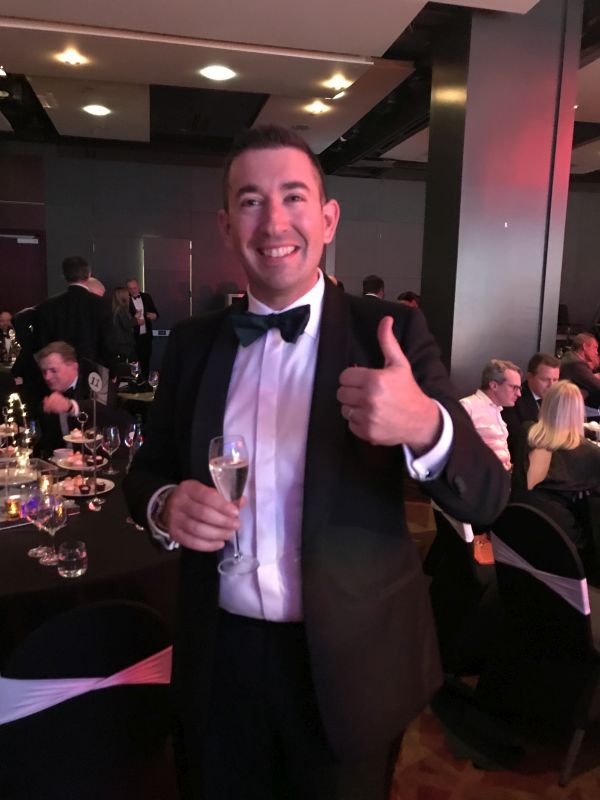 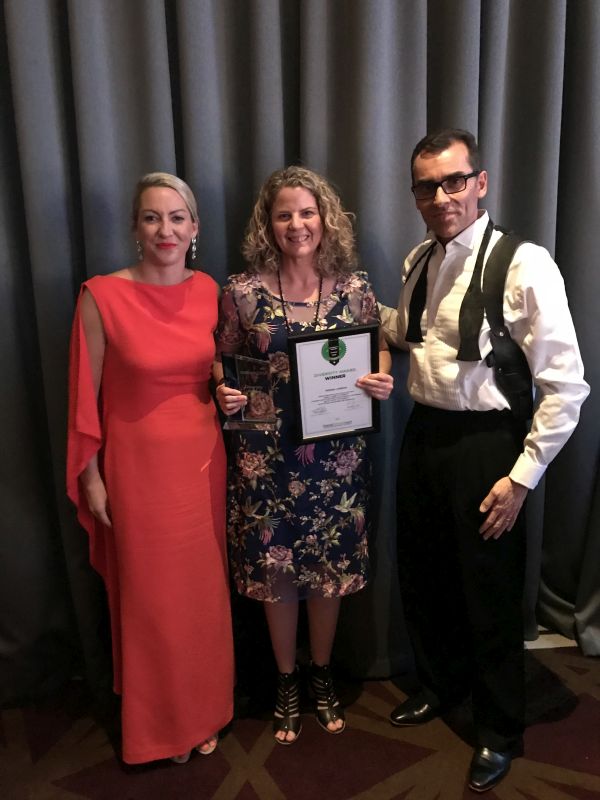 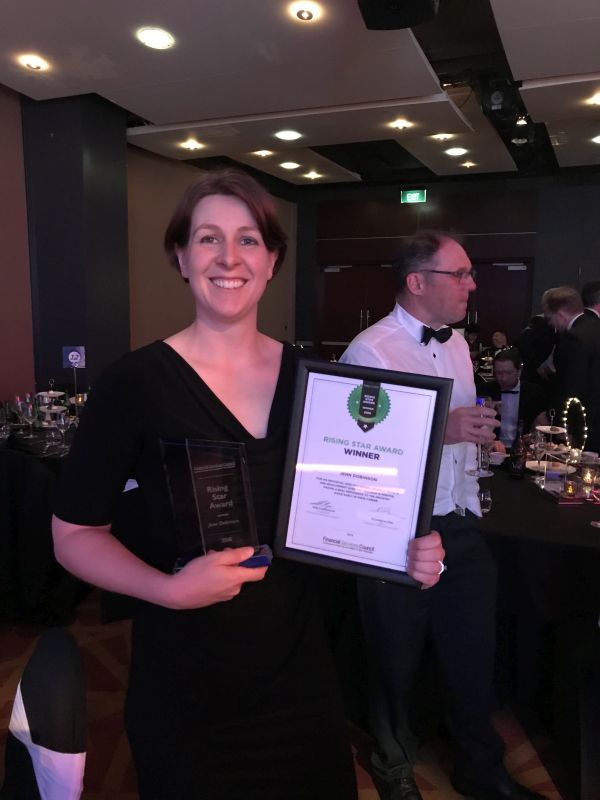 The female of the species (should be protected like the male)

In this article, head of national accounts from iPipeline, Stephanie Hydon says 'Women are significantly behind men when it comes to financial resilience'. Although she believes there is a definite move in the right direction there is still plenty to be done as she discusses here.

We have noticed gender differences in insurance offered by financial advisers too. You might be interested to see the chart below which compares the gender of quotes for some of the most commonly quoted benefit combinations. Can it really be that men require more than two times as much income protection, life, trauma and waiver than women? Or about 40% more life insurance? Or are women being insured for many fewer benefits in a mis-allocation of the insurance budget?  It is possible that with the stage at which insurance is applied for, perhaps more women at working at home raising children then men - explaining some of the IP differences, but the gap appears large, and persistent even in life cover, that it suggests another explanation.

This article by Ed Yong explains how he has been actively trying to redress the gender imbalance in his articles by searching for more women to interview and publishing more quotes from women in that industry, after he realised that, completely without thinking about it, he just tended to include a lot more men in his stories, and his presentations - mainly because they were the people he knew and would hang out with.

What has that got to do with sales? Well, investing a little time in 'not-pissing-people-off' is a great way to expand the market.

It turned out for Ed Yong that there were plenty of other experts in the field, and that talking with and quoting the whole range would make Yong's work more attractive and accessible to a whole lot of extra people.

The same can work with lots of groups of people.

My gay friends don't need to see a specialist gay insurance adviser, they want to see a good insurance adviser, who doesn't annoy them by being obviously uncomfortable with their sexuality, or worse, being rude about it. Pretty much the same as heterosexual people, really.

Barriers of race and culture may be stronger in our minds than they are in practice. Widespread beliefs that 'Chinese' people don't buy life insurance have been completely destroyed by research. The fact is that there in many, many, thousands of policies. If you don't have many Chinese clients, it's more likely to be a marketing issue with you, than a buying issue with them.

With a few small changes to make a service more inclusive we can go from being crossed off the list of people being considered, to being included, and even preferred as a supplier. Think of it as removing barriers to people seeing and appreciating your real expertise, and it becomes a whole lot easier.

CIGNA has joined other insurers in obtaining a 'rainbow tick' for a more inclusive workplace. The value of allowing people in teams to be people, secure against discrimination, should be be obvious to those wanting a more productive workplace. But the value is ensuring that you are open to the whole of the market is even greater. Here is a recent press release from: CIGNA

An opportunity, being lost

Therese Singleton has highlighted - again - the opportunity being missed by financial advisers with the single largest segment in the market: women. Singleton points out that there are 420 women that are AFAs, out of a total of 1844. That's 23%, which by any standard rates a 'could do better' - although it is significantly higher than the US, where the number is about 15%.

It is no longer rare for couples to take different approaches to money management, and there are increasing numbers of options for investors. For me, that means this market is an opportunity for investment advisers. If they want to win in an underdeveloped segment they should tackle the imbalance directly by either hiring or training a new adviser specifically for the job.