We usually think of an illegal act as a crime or at least, an action the insured person took that was a breach of the law. The example we often give in workshops is that a person got drunk and drove their car. Most fully underwritten insurance will pay anyway - the best policies have no exclusions at all after an initial period. Some insurance policies decline to pay for illegal acts, but many people that take these policies out assume that because they are generally law abiding, these exclusions will not apply to them.

We invite you to consider this case, that FSCL reports. A claim was declined under the illegal acts exclusion when a passenger in a car died because she had not put her seat-belt on. We are worried about this decision, because mere forgetfulness, especially on the road, could mean many claims arise from an 'illegal act'. The lack of clarity for consumers who may not realise that an illegal act includes, essentially, a mistake or forgetfulness, that means a breach of the road rules. Road accidents are a common cause of early death and many accidents resulting in the death of the insured may have been caused, or contributed to, by acts such as straying over the speed limit (however momentarily), drifting out of lane, or failing to take another look at an intersection - thereby failing to give way.

Illegal acts exclusions could represent a much bigger problem than most clients realise.

You could say that FSCL would like some advisers to give more advice. Link.

What surprises me is the idea that there is significant consumer brand value in any of the names being discussed. These are fundamentally industry brands, known mainly to insiders, referred to by consumers not because they are 'top of mind' but because they found the name and contact details in documentation from their financial services provider. 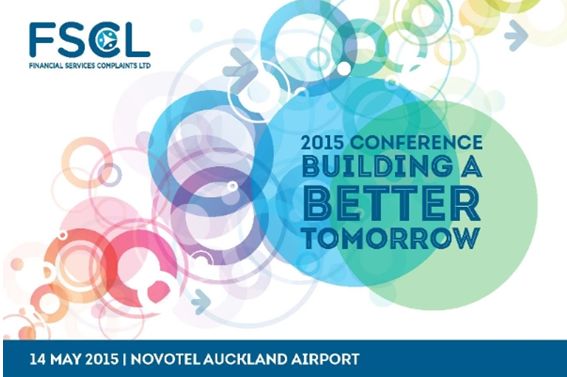 FSCL Conference is being held on Thursday the 14th of May in Auckland. Here's what author and motivational speaker Simon Tupman has to say:

"I’m excited to be presenting at this year’s FSCL conference. While financial services firms can make lots of plans to succeed, ultimately I believe it’s the capability of their leaders and the commitment of their people that make the difference. My session will show you not only how you can stand out from the crowd, but also how you can build a better you and earn the reputation of ‘the trusted provider.’

Click here for the full programme and to register.

Maryvonna Gray from Insurance Business NZ writes "Complaints against insurance companies have dropped by a third in the half year from July to December 2014, according to Financial Services Complaints Ltd (FSCL). The disputes resolution scheme, which is the largest of the four schemes available to insurance companies, said there were 28 cases opened in that period compared to 37 in the corresponding period of 2013."

The FSCL are hosting a one-day event on Thursday the 14th of May in Auckland titled 'Building a Better Tomorrow'. Click here for more details and to register.