30 Nov 2020 - Reserve Bank invited feedback on scope of the Insurance Prudential Supervision Act (IPSA) 2010 and associated Insurer Solvency Standards, releasing two consultation papers, with submissions closing on both papers on 18 Feb 2021. The Reserve Bank will be hosting a webinar to discuss the consultations on Monday 14 December. To express your interest in participating, email rbnz-info@rbnz.govt.nz Link to the announcement at https://www.rbnz.govt.nz/news/2020/11/reserve-bank-invites-feedback-on-scope-of-insurance-act-and-structure-of-solvency-standards

26 Nov 2020 - Health Funds Association of New Zealand (HFANZ) and the Financial Services Council (FSC) today announced a merger into one single organisation under the Financial Services Council banner from 1 December 2020, creating a membership association of close to 90 organisations. https://www.fsc.org.nz/site/fsc1/201126%20Health%20Funds%20Association%20of%20NZ%20to%20merge%20with%20the%20Financial%20Services%20Council.pdf

26 Nov 2020 – IRD tax policy website included information and a link to the Minister of Revenue’s speech to CAANZ on 19 Nov 2020, outlining the Government’s tax priorities in the short term. https://www.beehive.govt.nz/speech/keynote-address-chartered-accountants-australia-and-new-zealand-conference

27 Nov 2020 - NZX confirmed plans to create an Information Technology (IT) working group that will include leading representatives from across the capital markets’ technology ecosystem. https://www.nzx.com/announcements/364053

From the Health Funds Association:

More New Zealanders over 65 are holding on to their private health insurance, which the Health Funds Association (HFANZ) says is due to uncertainty over access to public-funded healthcare such as elective surgery.

Releasing its latest statistics for the December 2019 quarter today, HFANZ chief executive Roger Styles said the total number of lives covered was 1.411 million, up 2800, or 0.2 percent, for the quarter and up 8600 (0.6 percent) for the year to the end of December.

Working-age people still accounted for most of the health insurance uptake, but he said growth in the over-65 age group was significant. That older age bracket with health insurance grew by 2200, or 1.3 percent, last year to 167,000 – around 22 percent of the 65+ population.

“2019 was not a great year for DHBs, with industrial action and other difficulties resulting in a reduction for the first time in over a decade in the number of New Zealanders having elective surgery. Even though the growth in jobs and population has slowed, health insurance numbers are growing because the over-65s see the real benefit of retaining their health insurance for prompt access to treatment when they need it,” Mr Styles said.

“Not only will they get faster access to treatment, but health insurance also provides increasing options to access treatments and drugs not funded or provided in the public sector.”

Premium income for the quarter was up $12 million on the September quarter to $439 million. Annually, premium income rose $145 million or 9.3 percent to $1.695 billion.

The continued rise in the number of New Zealanders covered by health insurance – now totalling 1.409 million – reflects the ongoing value people are getting out of it, the Health Funds Association (HFANZ) said today.

Releasing its latest statistics for the September quarter, HFANZ chief executive Roger Styles said the total number of lives covered was up 2200, or 0.2 percent, for the quarter and 7900 or 0.6 percent for the year to the end of September, with the vast majority of that growth once again in the 25-40 age group.

He said employer-subsidised health insurance plans were continuing to prove attractive to both workers and their bosses as part of the focus on wellness in the workplace.

“In addition to the availability of wellbeing and wellness initiatives that many of our insurers now offer, health insurance means getting a better level of service through faster access to treatment when it’s needed and increasing options to access treatments and drugs not funded or provided in the public sector,” he said.

The year also saw an increase in the number of older New Zealanders with health insurance, which Mr Styles said was due to the ageing population and an acknowledgement by many policyholders that maintaining their cover was sensible in the face of increasing difficulty accessing public-funded healthcare such as elective surgery. The number of people aged 65 and over with health insurance grew by almost 1700 or 1.0 percent to 166,400 – around 22 percent of the 65+ population.

The following chart showing the estimates of changes by policy type is interesting:

Health Funds has announced that estimated growth in policy holders has taken health insurance ownership above 1.4million people for the first time. Although good news, there are two reasons for caution about this figure. The first is that New Zealand's population has grown - so an increase in numbers covered should be happening. The second is that aspects of the figures are estimated. 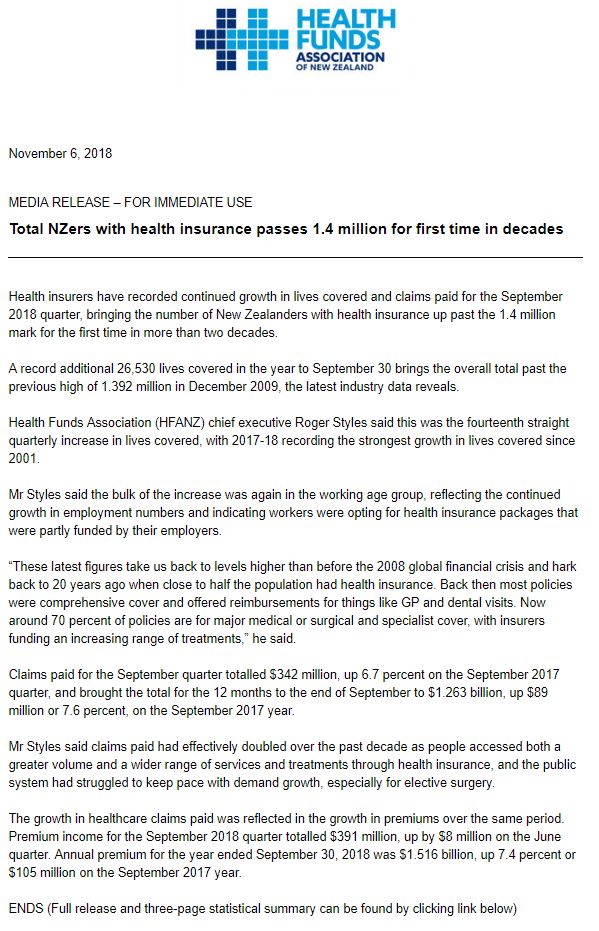 Roger Styles, writing on the HFANZ blog, credits the HFANZ code for the low rate of complaints about health insurance. Link.

FSC - Quoteable From the First Morning of the Conference

Damien Mu, CEO of Australia and New Zealand...before reflecting on the exposure created by the Australian Royal Commission, and then on how the current performance of the industry is something of a burning platform, and plunging positively into the conduct conversation.

Rob Everett, Chief Executive of the FMA, reflecting on the recent thematic reviews by the FMA and current work with the RBNZ, in contrast to the Australian Royal Commission said they were focused.

"...less on trying to find a rare, but dramatic, failures. Instead more focus on what happens day by day"

Rob added, tellingly, that it is what your staff do when they are not being watched which shows the extent to which your organisation is committed to good conduct. Rob's speech on conduct obligations was balanced and interesting. It is difficult to strike the right tone when there are a variety of levels of participation and engagement in the conduct conversation. His talk reminded me to explore the interplay between what conduct means as distinct from personalised financial advice, as both often intersect at the point of suitability assessment.

"We're at half-time and we're at nil all"

Rob Flannagan, Chair of the Financial Services Council, making a rather self-effacing statement about the value of the just-launched FSC Code of Conduct. In fact the decision to develop the Code as a central activity in the redevelopment of the FSC is a great example of leadership, not fully acknowledged in a score line of 'nil all'. However, Rob was making the point that the Code has to be followed up by development of guidance, training, and monitoring. That is something I know is happening, having spent some time on replacement business recently.

HFANZ have released the 2017/2018 annual review for health insurance in NZ. The report includes the following:

There is also more information on the proposed KiwiHealth initiative. Click here to view the full report.

Another data-rich press release from HFANZ: May 4, 2018

Mr Styles pointed out that in 2008 the annual claims total was $631 million, so that amount had doubled over the decade.

“People now have access to both a greater volume and a wider range of services and treatments through health insurance,” he said.

“Given media coverage is dominated by various demands on the public health sector budget, it’s easy to overlook the significant and growing contribution to healthcare funding which health insurance provides in New Zealand.”

The Health Funds Association Annual Review can be found at this link. Some highlights below:

HFANZ received a report on the net impacts of health insurance in New Zealand, carried out for the industry by Wellington consultancy TDB Advisory. Unlike previous research projects which have sought to look at the impacts of particular policy initiatives, such as subsidies, this work provides a broader assessment of the net impacts of PHI in New Zealand, compared with the counterfactual (i.e. what things would be like in the absence of health insurance). Despite very conservative assumptions, the report finds the existence of PHI results in significant net benefits for New Zealand. These include:

You can read the release from the HFANZ on insurance meeting the shortfall in funding for surgery. But before you do, it begs a question: is there a shortfall?

Well, you don't have to take my word for it. Read this.

The Health Funds Association (HFANZ) says tens of thousands more New Zealanders could be getting timely access to surgery each year if the Government looked seriously at measures to boost health insurance coverage.

HFANZ chief executive Roger Styles made the claim in the wake of yesterday’s release of data showing thousands more people missing out on surgical assessments across New Zealand in the December 2015 quarter.

“Health has had massive funding injections from Government but the system can’t cope by tax funding alone. People are falling through the cracks in the public system, while we have a private health insurance system which is massively underutilised, with just 29 percent of people covered,” he said.

The Ministry of Health’s National Patient Flow showed more than 20,000 people had their surgical assessments declined, delayed or transferred in the December 2015 quarter – a level similar to that in the September quarter.

“It’s time for the Government to start making better use of private funding sources like health insurance, which has huge potential to relieve pressure on the public system. It currently contributes $1 billion annually to total health expenditure and has the capacity and ability to do much more. New Zealanders with health insurance gain prompt access to treatment when they needed it, with no wait for surgery.”

The annual statistics are detailed in the HFANZ annual review, released today, available at http://www.healthfunds.org.nz.