HFANZ chief executive Roger Styles said the figures were consistent with the association’s own research, which showed up to 280,000 people were waiting for surgery.

“The numbers reported by DHBs are in line with our research,” he said. “More and more people need surgery, but our public system is stretching just to keep pace with growing demand, while less urgent cases have to wait longer and longer.

“What the DHB figures don’t show is the gap between referrals and surgery. The gap between needing and getting surgery is unmet need, and that’s growing.”

Mr Styles said the ministry’s assessment of unmet need was lower than HFANZ’s, but the trend was unmistakeable.

A survey conducted by TNS NZ based on 1,800 New Zealanders aged 18 and over in January 2016 showed the following results: 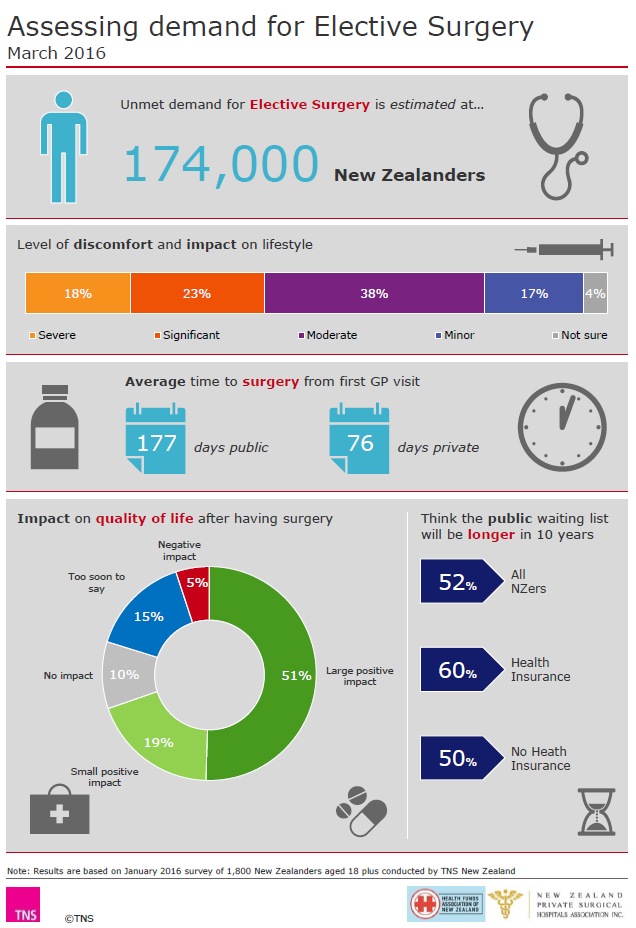 Referred elective surgery need just the tip of the iceberg

The Health Funds Association (HFANZ) says the Government has made a good start in measuring the unmet needs of New Zealanders referred for elective surgery, but stresses that this subset of unmet need is part of a much bigger picture.

Government figures released today show thousands of New Zealanders are going without the surgery they need due to an overloaded public health system.

In 2013, HFANZ conducted research which indicated that while around 110,000 New Zealanders were officially waiting for elective surgery, there were another 170,000 requiring surgery but who were not on any list.

“These are people who need surgery and may be in pain, but whose GP has not referred them on the basis that they are unlikely to meet the public sector threshold to get it within four months.

“Health Minister Jonathan Coleman is right when he says that the best way to meet unmet need is to carry out more surgeries. Growing demand for elective surgery needs to be addressed and one way of doing this is to improve access to elective surgery via health insurance,” Mr Styles said.

“New Zealand has a strong public health system that deals well with emergency, maternity, mental health and life-threatening conditions. The private health sector complements this system by relieving pressure for elective procedures and in a more timely fashion.

“Our members’ message to Government is simple: the private health sector is here to support, not undercut, the public system,” he said.

“Elective surgery wait times do not need to get worse before they get better.”

HFANZ said health insurance had funded more than 150,000 elective surgical procedures in the past year, but with increased demand, there was the capacity and the willingness to do much more.

Results from HFANZ’s 2016 research into this need will be released later this month.

If Only Industry Bodies Could Work Together

In his incredible work of observational economics ("The Wealth of Nations") Adam Smith identified the tendency of business folk to collude. Since then it has been accepted that consumers have generally been better off when companies from the same industry do not talk to each other too much about certain things. But there are limits, and sadly, New Zealand is exploring those limits.

The only patchy coverage of the market that will remain if both the HFANZ and FSC lack major industry players from their memberships renders market data almost useless. Market data has been one of the main reasons for membership. Lobbying on common issues, such as potential legislation, promotional campaigns, standards, and tax matters are other useful services, but are less reliably valuable. These too will all suffer if reconciliation cannot be managed.

It would be a great shame.

But the associations cannot simply stand back and wait for insurers to return. They need to look hard at the value they deliver for the cost of membership. They also need to have better rules to manage friction between members. Recent disagreements should not form a long-run barrier to future co-operation - the next couple of issues to face insurers may see them all line up together to deliver a better outcome for all New Zealanders rather than splitting down the lines of different distribution channels as they have in the past.

The economics could be improved if the Healthfunds organisation were part of the FSC.

HFANZ have released this press release expressing their disappointment at the failure of NZ First’s Affordable Healthcare Bill to make it past its first reading in the House yesterday.

"Health insurers have expressed their regret that the New Zealand First-sponsored Affordable Healthcare Bill failed to get past its first reading in the House yesterday.

The member’s bill proposed a 25 percent health insurance rebate for people aged over 65, the removal of fringe benefit tax from health insurance to stop penalising employers who provide it for their staff, and a requirement that parent category migrants have health insurance on arrival and maintain it in New Zealand for 10 years.

Health Funds Association (HFANZ) chief executive Roger Styles said it was disappointing “that the Bill had not gained the support of Parliament, as it would have been a big step in helping to shore up future health funding sources and to address New Zealand’s dangerous over-reliance on taxpayer funding.

However, he believed the Bill’s defeat actually signalled the start of debate on future health funding rather than the end of it.

“This is the first time in over two decades we have seen Parliament debate the issue of future health funding and measures to help broaden the dependence on taxpayer funding.  The debate can only intensify as the issue is not going away.”

Mr Styles said that while the Bill contained specific initiatives, there were potentially many measures which could help with future health financing, and HFANZ would be looking to work with all parties to help identify practical solutions. 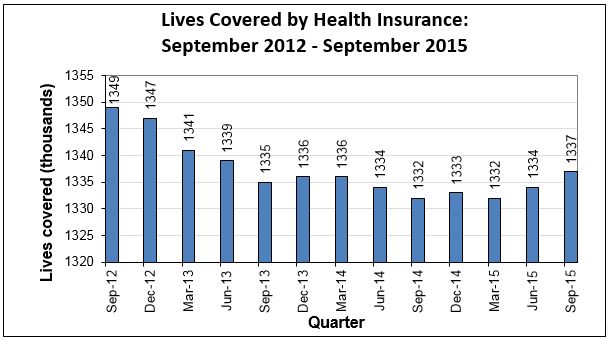 Here is a media release from HFANZ released this morning.

He takes over from Unimed chief executive Dermot Martin, who decided to step down at last week’s executive meeting after holding the position since December 2010. He also led the executive from 2000 to 2006. Christchurch-based Mr Martin will remain on the executive.

Mr Annals, of Wellington, has been a member of the HFANZ executive since becoming chief executive of Accuro in September 2013. He has been deputy chairman for the past year.

He has more than 30 years’ experience in the health sector. He began as a registered nurse at Waikato Hospital where he worked in a range of clinical and nursing and general management positions for 20 years. He was general manager of Waikato Hospital prior to his appointment as chief executive of the New Zealand Nurses Organisation in 2001, the position he held until his current appointment with Accuro.

The full draft of the Affordable Health Care Bill can be found at this link.

Wellness in the Workplace Survey

The second Wellness in the Workplace survey conducted by Southern Cross Health Society and BusinessNZ was released. It is a nationwide survey of 113 employers (with 116,00 employees) and can be found at this link.

Here is a list of various messages from the comprehensive report listed in a Southern Cross press release:

HFANZ's recent media release has the latest June 2015 health insurance statistics. The key points to note are a rise in lives covered (see chart below), particularly in the 25-35 and over-65 age groups, and that the total amount of claims paid is again over the $1 billion mark for the year. 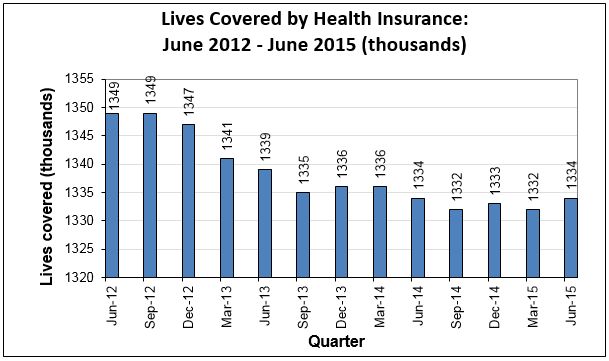