We have just released the updated medical premium comparison database reflecting the price changes made by Southern Cross on 1 November. It is version 76.

Well worth checking out this report - both if you are an employer considering policy, and if you are a stakeholder in the employer market for insurance. Link.

New Zealand’s largest health insurer, Southern Cross Health Society paid out $963.7 million in claims, up six per cent on the previous year. At 73 per cent of all private health insurance claims, the business paid out significantly more than its 62 per cent market share.

In the last financial year, the Health Society received $1,080.4 million in premiums. For each of those dollars it returned 89 cents in claims to members. This compares to an average of 67 cents in the dollar among the remaining New Zealand health insurers, with some returning as little as 60 cents in the dollar.

Southern Cross is a not-for-profit Friendly Society which aims to make a modest annual surplus to deliver maximum value for its members.

“The Society continues to deliver excellent value for members with an outstanding claims ratio compared with other health insurers. We’re always conscious of the fine balance between offering maximum value for money to our members and ensuring the affordability of premiums.”

Chief Executive Nick Astwick says the results mean the Society can continue to look to the future with confidence.

“We’ve made some decisions over the past year that have delivered a sound result. We estimate our Affiliated Provider programme has saved an impressive $56 million and expect to see those savings continue. Digital adoption is also up significantly, with logins to My Southern Cross up 151 per cent.

“We’re now turning our minds to our goal of helping Kiwis live their healthiest lives; investing further in the business to deliver continued benefits and exceptional value for members in years to come.”

Southern Cross Health Society now has more than 870,000 members. It retained its Standard and Poor’s A+ financial strength rating for the 17th consecutive year.

• Investments generated $22.1 million of income, with total investments at $492.5 million by the end of the year

* Based on Health Funds Association of New Zealand data

Fiona Brown has been appointed chief legal officer at Southern Cross Health Society. Brown is moving from Kiwibank and her previous role as General Counsel and Company Secretary. Prior to that she has worked 11 years in a variety of roles including Head of Governance at ANZ and Chief of Staff and Head of Securitisation.

Several advisers have phoned or written to express dismay at the changes to service commissions by Southern Cross. The primary concern has been for the ability to provide effective service to customers under the new model. Secondary concerns have been the impact on adviser business valuations, which would appear to be significant. As it happens, I will be running a valuation seminar on the seventh of August, I shall cover the issues of service commission changes and agency agreement terms in more detail at that session.

An absolutely huge couple of weeks of changes:

Completed a big set of changes, with some quite substantial shifts (see more posts later today and next week) 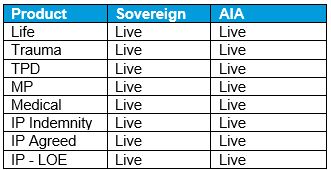 The latest medical insurance premium comparison database is version 7_3. If you are a corporate subscriber you should have received your copy by now. It includes changes:

Congratulations to Southern Cross who were awarded Canstar's Most Satisfied Customer Award for the fourth consecutive year.

“Southern Cross Health Society has been rated by its members as the market leading health insurer for its service quality, communication and performance throughout the claims process, winning our customer satisfaction award for the fourth consecutive year,” says Jose George, General Manager of Canstar New Zealand.

Southern Cross has released some stats as of the 31st of March 2019 stating they have 870,584 members which includes their oldest member of 107 years old.

Then highest claim over the six month period cost $165,222 for gastrectomy, followed by two instances of spinal fusion costing over $128,000 each.