AIA has released initial findings of the Adviser Wellbeing Survey that was conducted by Dr. Adam Fraser and Dr. John Molineux to understand the views of nearly 600 financial advisers from all around the country. The full report will be published early next year.

“Preliminary results from the recent AIA Adviser Wellbeing Survey have uncovered some concerning results with around half of those surveyed saying they are using alcohol to cope with stress.

Also of concern was that 25% of advisers surveyed indicated they were considering leaving the industry altogether.

In late September, AIA undertook a wellbeing survey of almost 600 Kiwi financial advisers to gauge the mental health of advisers and explore the habits and attitudes of advisers experiencing positive mental wellbeing and understand the behaviours needed to manage significant market disruptions.

The research is being done by Sydney-based researcher Dr Adam Fraser, founder of The e-lab, and Dr John Molineux. AIA NZ is sponsoring the research and will make the findings available when the full report is completed around February next year.

AIA NZ chief partnership insurance officer Sam Tremethick presented some of the preliminary findings during a virtual adviser roadshow saying there were some concerning results, as well as some positive findings.

"The feedback was honest and raw, and to be honest, confronting at times but it provided us with a great insight as to how you are feeling and how we can make the industry stronger," he said.

"The most alarming statistic that came out of our study was that 25% of all advisers surveyed said they were considering leaving the industry.

"This is a massive concern as we know that clients are better off if they receive financial advice and understand that our customers will be the poorer for it if this is lost."

Tremethick said while collectively this paints a concerning picture of the health and wellbeing of the adviser market, Kiwis are still faring a lot better than their Australian counterparts in almost all areas.

There were some positive points uncovered as well – one being there are pockets of advisers who are doing better than ever in the current environment, and the report will share some insights into what they do differently to thrive. Click here to read more

Quality Product Research: How do we model the package weightings and why?

A package should reflect the relative value of different types of insurance protection to the person buying that cover. We put weightings on packages because, for example, a package of just life and trauma is less comprehensive than a package of life, trauma, mortgage protection, and medical.

A summary of the weightings is shown below: 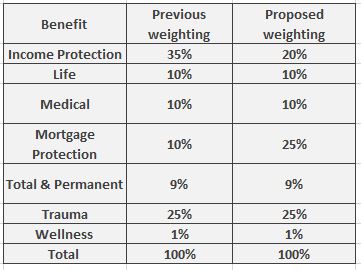 Zoom in on the income and mortgage elements for a moment. That was raised by several advisers recently who feel that mortgage cover is the first element of temporary disability protection put in force. Market practice backs this up - quoting by advisers in Quotemonster shows that more mortgage protection is now quoted than income protection. So how were we to revise the package breakdown? We took the view that of the 45% of the package value assigned to MP and IP combined, the scores should reflect the relative weights when MP and IP are typically included in a plan together. MP often covers the first 40% of income insured and IP tops that up to about 75%. Clearly it can vary according to rules specific to each company and products used, but broadly this gives a new weighting as follows:

We value and appreciate all the feedback coming through! If you have any questions or comments please email them through to info@quotemonster.co.nz

Fidelity Life is launching the Sharecare service to their clients in less than one week. Watch this video to see how one woman completes the RealAge test, engages with personalised content and is rewarded with Green Days as she changes her behaviour over time.

Updated the link which was broken - apologies, fixed now.

Fidelity Life have announced that they will delay the launch of Sharecare slightly. Advisers will now be able to access the app on the 16th of April instead of the 6th. Customers will gain access in early June (date TBC). Learn more about Sharecare here.